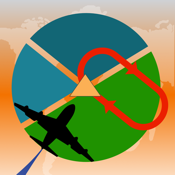 This app got me on track

App does exactly what it is meant to do

Military pilot and I used this app to get a better grasp on how to enter holdings. After using this app I have had 0 mistakes since . Furthermore the review recently published with the 1 star surprised me because any pilot would know the difference between a bearing and a radial . If you have a bearing convert it to a radial and use that to determine your holding procedure.

I’ve been using this app for the past month as I prepare for my instrument checkride, and it definitely helps with practicing the basic holding calculations. Wish there were more instructions with radials than bearings, since those seem to be more common in the real world, but it’s good to practice with both instructions. Also, it would be great if the visual aid showed you the heading to fly for the outbound teardrop correction or the inbound parallel correction.

Variable number text needs to be larger for these old eyes.

This app really helps my students grasp holding pattern entries. No more "deer in the headlights" looks. Plays like a game which is always good with the younger generation.

I'm using this app to study for an upcoming airline interview. It's awesome! It makes studying the dry, tricky topic of holding patterns fun! I like that the tutorial offers not 1, but 4 different ways to visualize pattern entry.

Great tool for learning and refresher

In addition to helping you learn, this app gives sample problems to help master holding procedures. I'm a CFI working on my CFII and plan to use this tool with students.

As a cfii I am going to recommend this application to all my students! Very well done! Very unique and helpfully application!!

As a CFI I will use for my students and myself, a picture is worth A thousand words. Why does the app load upside down ??? I have to turn my ipad Upside down to read????

Fantastic app! Great for students and for CFIs teaching the material too!

I want my money back. I agree with the flight instructor. Totally wrong. And as a student I need the correct practice and easily followed steps on how to get there.

Spend enough quality time practicing with this trainer, and even the directionally-challenged will get it!

To the user that claimed that the app is incorrect:

I'm a flight instructor and can confirm that the app works correctly. The visualizer is mirrored to the map plan view since your point a view when looking at the DG is different then your point of view when looking at a top down map view. The tutorial in the app explains this. You can verify this by comparing the results from the plan view and from the visualize mode are see that they are in fact the same.

It really helped me understand entering into holding, which is why it gets three stars. I am having significant trouble visualizing the holding pattern and I'm not getting a lot of help understanding it with this app... It could just be me though.

Excellent for understanding holding entries and visualizing them without drawing it out.

As a CFII instructor I downloaded this to help a student work out holds. The holds they give are just as wrong as could be. They say "hold SE on the 331 bearing" or something to that effect. Well 331 isn't SE, in fact it's opposite of that. So I see the word bearing and think, "ahhh so we'll just take the reciprocal"...and with that thought they were all wrong. When they draw out their examples, in this case "SE on the 331" they draw the pattern on the NW side. So their clearances are just totally wrong, as are the drawings. As a student this app caused me confusion so I didn't use it. As a CFII I know better now, and watched my student make several drawings correctly, only to be told they're wrong by the app that did them wrong in the first place. Useless app, DO NOT BUY IT! It will make things so much harder. And the reality is if you can think of two numbers between 360, you can give yourself endless clearances and draw them correctly and learn this for free. Wasted money here.

Helpful, but with bugs

As an instrument student this really helped nail down my holds and gave me the confidence when my instructor pulled impromptu hold instructions while in-flight.

The holding calculator and practice answers are correct, but the holding pattern visualizer and tutorial are backwards. The parallel 110 degree sector should be to the right for right hand turns, and to the left for left hand turns. The teardrop sector is always 70 degrees.

This is the first review I have written for an app, but I felt it was warranted. As part of my IFR training, holds weren't coming easily - mostly understanding of relative position to a hold. Not a problem any more. This app is incredible as a training tool and explains, shares tips, and allows for practice, practice and practice. I don't understand why anyone would need one of the other "hold calculator" apps if you've learned and practiced using this app. Well done to the designers.

Nice reference at your finger tips.

As a CFII, this is a handy tool to quickly show students how different holds work. Unfortunately, it has not been updated to work with iOS 11.

Well designed and perfect for "drills" to get comfortable with procedures before actually flying. Well designed options before and after each scenario.

Nice, simple app to practice visualizing holds. Saved a few bucks in the sim for sure

This is a great way to refresh your holding patterns. I wish the app was more than just that though.

Great to keep your holding skills sharp. Love it!

Definitely an app for anyone working on their instrument rating or who needs to brush up on some instrument proficiency. Holds are one of the more difficult maneuvers to be able to visualize, and this app has made a big difference for me in developing the ability to do so. Thanks!

Simple but effective. Maybe a bit expensive (like everything in aviation).

I've tried several other apps but this is my favorite because it gives you hold instructions without any clues; thus, forcing you to think it through. It also provides multiple choice answer buttons, visualization on the heading indicator option, and an optional full view (plan view). I hope the developer updates the app to work with IOS 11; it would be a shame to lose this fantastic resource for pilots.

This program is great! It has been a big help in my IFR training, I would highly recommend.

Great buy, if you are a serious flight student - it's invaluable

After an hour you'll have a good framework to deal with holding. Although ATC rarely, if ever, gives bearing holding instructions (they usually give hold as published or hold inbound on some radial). Despite the oddness, the program just makes you think a bit harder. That's ok. When you are in the air doing it for real, you'll nail it.

I am a student working on my instrument license. I always have struggled with visualizing how to enter my holds. After using this application straight for one hour. I can now mentally picture the hold without having to draw out the hold and fix on a piece of paper. This is a wonderful tool!

Helped me a lot with my IFR class

I recommend this app to all instrument students!

This is a very good learning tool. The in flight application is unsurpassed. But when the app craps out and goes to a black screen after you write a good review, and you try to contact customer service the don't get back to you. I deleted the app and now have to pay again to reinstall. Nothing doing!

First purchased app, on my ipad. Definetly worth it so much, good explaination and visualization it's a simple but really useful for students and senior pilots. Please, keep update it with more variety question, i do will keep it save this app, forever :-D

Excellent app. Does exactly what you want it to.

This app really helped me to visualize holding entries, something I was really struggling with. Using the DG to determine the entry is very logical for me, as that is the instrument used to enter the hold. Having the ability to practice holds outside of the cockpit is invaluable. My only suggestion would be to have a setting that turns bearing type holds on and off. While they are a good mental exercise, they are not something I need to practice.

excellent a must to have

I can't live without it. An invaluable tool!

It's great for instruction

I regularly give holding instruction using this app. I like it

this app is really great for training. For new and for experienced pilots, definitely great. A must have

My students love it

As a CFI and CFII I use this app with my students all the time to help them learn.

This is a very good app for training purposes. For operational use the fonts need to be larger.

Only thing that I could suggest adding is the Teardrop heading to fly once reaching the fix. This should adjust based on left or right turns in the hold. In any case will be suggesting this app to any of my flight students studying IFR.

I'm a helicopter CFII on contract to an overseas flight academy who teaches only students for whom English is a second or even third language. Getting the concept of Holding Entries taught was ALWAYS a struggle! That is until a friend recommended this app. As the saying goes, "a picture (really is) worth a thousand words!" Now showing how "the Teardrop side is always the Turns side" and "20* up or 20* down from the HSI/RMI 90* tick marks" looks and works is a breeze! Most of the students, some as low as level 2 English speakers, now get the concept quickly and actually enjoy learning it! Well done!!!

Pretty decent tool when your first trying to learn holds