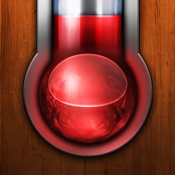 Customer Reviews of the Thermo App

I LOVE this app I now have a thermometer anywhere very cool!!!

Does not work and deleted it from my phone after 30 seconds. Then I noticed a charge to my Apple Acct for $2.15 for a free app. Disputing it now and do not bother with this one.

Turned into another crappy app

Used to be my favorite, until I reinstalled the app. Had used this for several years when it first came out, but deleted it about a year ago. Re-installed it yesterday and was extremely disappointed. The history is now a paid option?! $2 to see this? $2 to remove the ads? Between $1 and $10 to have a fancy thermometer instead of the normal one?! If I could give ZERO stars, I would.

This is the best temperature ever :)

I love this so much tell me what hot going to be on my iPhone but when I was checking my iPhone it was very hot like 91 degrees it's very hot . So I live this app five stars

Thermometer is off by 5 degrees, on a constant level. I compared this to various local sources and it's consistently off exactly 5 degrees. I do like the temperature history charts. The phone app show less than a year, while the ipad shows over a year. It would be nice to show at least 2 years.

Thanks for this app

I denied it access to my location and it just goes in circles.it cant tell what the real temp is its just a weather app.

I was under the impression this was a free app and then I attempted to remove ad and received a "Thank you for your payment." Deceptive tactic to charge money. Just charge for the app.

The app asked for my finger print then pops up that says agree the charge with your fingerprint for $1.99 what a scam

This app need to be fixed. It showed that the temperature outside was 43 degrees when it was actually 9 degrees here. Not accurate at all!

I downloaded this app and I hit the home button on iPhone to go to main screen and it upgraded my account to ad free and charged me $1.99. I never wanted this app. How do I dispute this charge?

pk u for dad's Review of Thermo

I recommend this for someone who likes thermometers. But it is not really worth it to pay for these extra wallpaper skin. So if you want something basic this is perfect. But if you want to spend some extra silly money it has the option. I like to use it on its basic function as something to look at as a thermometer and traditional sense. But it works great either way.

Toxic! Wants to Install Other Apps - Stay Away!

First off, you don't need this app to use the "Thermodo" temperature device. That app is called "Thermodo" (obviously) and not "Thermo." This app's only purpose appears to be an attempt to install its advertised apps. I apologize for the all-caps, but I believe the following is very important. (Esp. if you allow apps to be purchased/installed without confirmation.) !!!DO NOT TAP ON THE "x" PART OF THE ADVERTISING!!! Tapping the "x" to close the ads will lead to a "Confirm your in-app purchase" message box. I asked three people to tap on the "x" just to make sure it wasn't me. All three lead to the same "Confirm your in-app purchase" for the software being advertised. Next I tried an Apple Pencil. Same result. "Confirm your in-app purchase." Avoid like the plague. Who knows what this creep-ware wants to install & bill you for... My iPad feels like it needs a bath. : (

I tried it and no matter what I did it wouldn’t tell me the correct temp. It’s the summer in Louisiana and it’s telling me it’s 33 degrees!

I hate this app because it has ads and you have to pay to remove them and it is not based on my location you can't set it up it does not work for me, If I were you I would recommend not getting this app I don't like it at all. Please don't get this app :/

It could be a nice app, if it wasn't that they only want you to buy the add removal...

Inaccurate and it opens with big ad covering the bottom of the thermometer and after about 3 seconds, it diverts you to a full screen ad. You get what u pay for ...nothing to download for a nothing app.

It gives me exactly what I want, the current temperature in my little Indiana town.

This is the worst app that you can get. The temperature is so off. You have to add so much degrees that it's silly. I'm going to recommend an app that's way better than this app. The Weather Channel. Buy this app before you spend your time with this app.

Too many prompts to purchase items

I just downloaded this app to check temperature in my house. When I went to use it, I kept being prompted to purchase a completely different app. I could not get past this to be able to use the app. Closed it and deleted app off my phone.

I was away from my phone for 5 minutes, and suddenly this app appeared on my phone. If you want customers, try ads, not completely out of the blue automatic downloads. I don't even have any apps from this developer! And I don't need it! I HAVE THE F**KING WEATHER CHANNEL!!!

This was all around an amazing app I would use it

I love it. I can see temperature before I get out of bed!!!

It doesn't work ..do jot waste you time installing it..such a waste Give 1star just because they dont take review without it but it is not worth

AVOID. Gives you the outside temp that any weather app will. Was loading it to see what it does but if you try and x out an advert (that comes up through initial review) it takes you to a buy screen where one usually does not expect it and it makes a sale for $1.99. Useless and makes you pay before you get a chance to see it work.

If I could rate 0 stars, I would

UUUGGGHHHH!!!! On my iPad, attempting to X-out the ad, it charged me for the app before I knew it! VERY POORLY PLACED - unless you're the developer with the bank account. I hadn't even tried it yet; like others, I was hoping to find a THERMOMETER app, not the area temperature which my iPad already flippin has for me (and so... why bother). Instead, I've wound up *paying* for an app I had not yet even properly opened - and that I DO NOT WANT! BOOOO, developers. BOOOOOOO. HISSSSSS. I'll be calling my bank tomorrow and disputing the charge. After that's done, I'll uninstall the app and be certain to never open any apps from this group again. 10-12 UPDATE: I got rid of the app & had the charge reversed; only had to visit the Apple support site. Thanks Apple! As previously stated, I won’t be repeating the mistake of opening anything from these developers, and would recommend that others follow suit.

Temperature is spot on!

While we've been going through a July heat wave - this app has been quite accurate in determining the actual temperature, while also capturing the "what it actually feels like" estimate. Will be curious to see if this remains true through the winter months .

I clicked on the 'x' in the corner of an add which would imply you can remove it. Next thing I know the app charged me..this is definitely an ad scam designed fool customers. Don't download this app

Can’t read it unless you purchase. Deleting.

Kind of angry, deleted it :/

Got a newer iPad, downloaded my purchases and this one came up with ads and extremely inaccurate. I expected it to transfer, since I paid to get rid of the ads, but it didn't :/ So I downloaded a new weather app, and deleted this one. It was great, on my previous iPad, without ads. Now on my iPad Pro, it's awful.

I812 so what's Review of Thermo

This app done not work.. It has an add covering the temp so it cannot be read.

Basically a scam for money

Careful where you tap on the app, or you'll activate a purchase. Inoperative even with ads.

Exactly that, there's a good reason why it doesn't work the way you'd expect it to. I have an iPhone, and the iPhone is not equipped with a thermostat sensor on it. So how does the app get a reading? It requires your location so it can get the temperature from your local weather forecast. This app does NOT get real time temperature. And requires your current location in order to work. I would much rather have an accurate weather app than this one.

Worked a few times, then got stuck at 75 even in a high 90s heatwave. Even rebooting doesn't make it work.

Only purpose of this app is pop ups and trying to get you to pay $1.99 or buy other apps. Deleted it 5 minutes after installing.

Temperature on screen's Review of Thermo

reliable use everyday several times a day!! BUT it is NOT accurate the last 2-3 days, what has changed?‼️