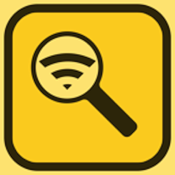 Using an iPad Air. Trying to do a survey using a server agent. The app crashes 75% of the times that I click on the symbol to do a speed test with the agent. I end up back tracing my steps more than doing the survey. The iperf3 agent measures in Gbps and claims I am downloading at 7 Gbps (I wish). The internet download function reports that I am only downloading at 2mbps even when standing next to the access point. However, I can stream YouTube videos at 1080p from the same location. $99 I will never get back. Just ordered a WiSpy mini and software from MetaGeek for $199 because this app is poorly conceived.

Works pretty well for speed tests, but no coverage heatmaps

I purchased this as well as the companion WiFiPerf app (to perform imperfect speed tests). The interface is intuitive, although its impossible to use without having access to the user guide PDF as there are no labels for any of the icons/symbols that you place on your floor plan to perform the various functions. *** Bugs *** There are scaling issues in projects. If you setup a new project and scale it using the ruler tool, you cannot then zoom in/out on the map while performing your survey, because your plotted test markers will get misplaced. Although the floor plan image expands or shrinks as you pinch, the underlying grid for data points must not. This was a disappointment because finer touch control may be difficult on complex floor plans without the ability to zoom during a project

Well, I did plunk down $99 for this app. It's proving to be useful. However, it is in a very rough state. At this point it seems a high priced beta rather than a finished product. For this much money it really needs a few things: 1. Better documentation. The app is very poorly documented and sparse. It really does not explain using the app. Just quick one line descriptions of each icon and some screen grabs. 2. The website has a video that is several minutes long, but there's no audio, so you have no clue what's really going on. 3. The app is not what I would call "intuitive" at all. You really have no idea going in what does what. For example, there is no indication whatsoever how to add a floor-plan to a new site. By pure chance I tapped the blank area below the name and description and a window popped up where I could select an image from the photo gallery. Is it so hard to add a button that says, "Add a floor-plan"? It's clear this was designed and developed not by an experienced developer, but someone who wanted a tool for wifi surveys on the iPad. I have no doubt that it will improve over time, but $99 is a steep price to pay for such an unpolished product. That being said, I hope this is taken as constructive criticism and not simply another App store "bash" on a worthwhile app. I look forward to future improvements in the design and capabilities of this app and hope for great success as this only extends the amazing capabilities of an amazing device. And really, isn't it just awesome that you can do a wireless survey on an iPad?

Great potential just needs to have the bugs fixed.

This app has great potential but it just needs the bugs fixed. I love the fact that there is an iPad survey tool, just wish that it would work on the "New iPad" and that importing diagrams were a little less painful.

App is buggy and data is inaccurate for enterprise networks

I have been using this survey app for over a couple months now, and during this time, I have experience a lot of issues. The app crashes a lot during and after my surveys, and many times the heatmap and tables with RSSI's readings are inaccurate. Be cautious using this app on a enterprise level surveys.

The concept is great, but it feels like it is still in beta. I think the developer knew more about Macs and surveys than iPads. A welcome tutorial, updated documentation, and perhaps a support contact would be welcome additions to the app. Crashes too often.

Another great app! I have done MANY site surveys over the last 20 years. Having something laptop based is a back breaker. The iOS based tool is a strong contender for my favorite app. Fast, easy, good output. The UI takes a little getting used to, maybe a welcome tutorial for people not used to surveys would help. Worth the $99 for sure! Can't wait to show it to clients.