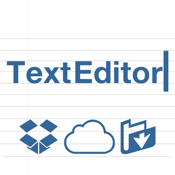 Nice, basic free editor; its best feature is the ability to EASILY transfer files to/from your PC by accessing your iPad via a web page. Worked well with small files; for large files, there were some repaint and scrolling issues. However your files were still intact (with the exception of just 1 crash I had once). Sometime in December 2014 the software self-updated. Most - but not all - of the scrolling bugs were fixed, but now new bugs cripple the software so bad that I'm going to have to give up and switch to a pay editor. One bug is that the GUI buttons disappear after a few seconds, and I can't figure out how to get them back without aborting the software and re-starting it. The workaround is to IMMEDIATELY do a "find" and keep the find dialog open. Another crippling bug is that the "find" no longer finds all occurrences, but only the first 2 (forward-find and backward-find only work once). This software has great potential, and I hope the author works on fixing the bugs and improving testing procedures before release (new versions should have fewer bugs, not more).

Crappy App.. Does not integrate with Dropbox

I enabled Dropbox on the settings and gave the username and password. Then a new blank screen pop up shows and nothing after that. I tried 3 different drop box accounts and the same issue. Wasted a buck on this crap...

This is the only thing I needed it for. Also can't connect to iCloud storage. Delete after 10 minutes.

UPDATE: previous version, I critiqued the disappearing button bar. That works better. More recently, I have attempted to select text. Attempted. The blue selection handles do not stay put where I place them. They move above or below to other parts of the document. It feels as though I am wrestling with a gremlin inside the app (on an iPhone) whose wishes are different from mine. I gave up. ------- I bought the app to have a text composing app on my iPhone 5 (iOS 6) that could save directly to Dropbox. I wasn't looking for more than the default Notes app functionality besides “save to dropbox”. The app does that part well. I like the way it allows me to name files. Basic text composition, open from any device attached to Dropbox. Good. PROBLEM Button Bar Disappearance: One thing I have noticed in the 1+ days I have been using TextEdit-- at the top of the screen there's a file name title bar and button bar below (buttons: save file, close file, zoom, open/close keyboard). After a while, those disappear. The text and the keyboard were the only things visible. I WAS able to make them reappear by touching near the top of the screen. But as I kept working with the app, I could NOT get the buttons to reappear. I'd composed a lot of text and there was no way to save it without the save button. I tried touching, pinching, swiping, pressing for a long while, pulling down at top of page. Nothing. WORKAROUND: To save the text, here's what I did-- 1. select all, copy. 2. Paste not a new note so I was sure I had it. 3. Tap home button to go to home screen, then double tap home button to display all open app icons. 4. Press the TextEdit+ icon until the close button appeared, press close button. 5. Relaunch app (hello again, user interface and button bar!), navigate to file name, open file. Select all paste. Save.

Simple text editor is very good. Up and downloading files is very easy, at least from an IMac, which is all I have tried - or need. One bug. Although the app loads a text file and displays it in full screen, anytime the screen is touched, the bottom third of the text window suddenly becomes blank. That is, the text is now only showing in the top two thirds. Both in landscape and portrait modes. It doesn't effect the text editing, but just loses some screen real estate.

I needed an app where I could do simple text editing that didn’t automatically get converted to RTF or to HTML and this did the job. Thank you very much!

Not Suited to iOS 6 - potentially gr8

Tested: on iPhone and iPad, but app's editing tools do NOT work. Devices had iOS 6.1.3 installed. Inquired: Developer support reported, "RTF file will not work in iOS6. This feature is support in iOS7 only." =NEEDS=LISTING=UPDATE= < review will be updated if app is ever iOS 6 compatible >

This program does not do what it says it does. You cannot save a file as promised. The program does not include a file attachment that can be brought up when sending it to someone. I have written customer service and tol them the problems. Let' see if the bugs are corrected.

Looks nice but he Dropbox integration doesn’t seem to work

I get a message about the “old version” not supported. I’m not sure whether this is a Dropbox issue or something with this app (I suspect the latter).

I literally bought this for one reason, and one reason only - to find and replace items in a text file. It 100%, absolutely, does not work at all. I put in the search function and nothing happens search. Search & replace is the same result. DO NOT BUY THIS!