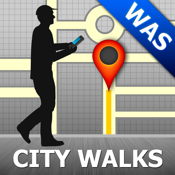 App keeps shutting down when you try to zoom in on a site.

I purchased this app to help plan a trip to DC. It was helpful, but overall, a very clumsy app. Aside from missing important sites, such as the Supreme Court and the MLKJ memorial, custom tour can't be shared via email. For $5 it should work better. Please update. Thanks.

I absolutely love this app. When I'm traveling I feel like waking makes me know new little unknown locations that no guides will tell you. This app gives you the chance to know all the important spots without missing these perks - and without getting lost. I used it in many locations in US and China. It's a must have for my trips.

I own a lot of travel apps and this is the WORST. SAVE YOUR MONEY.. Hotel brochures were more helpful than this app.

With a City as dynamic as Washington,DC, it is unforgivable to not have major attractions on the map - especially one as big the National Museum of African American History and Culture. Now I'm wondering what else is missing. Wish I'd known before I'd wasted $5 on a so-so map.

I love walking tours, and you can't beat an app that let's you create your own personal tours (add the locations, it will map them) - or use some pre-loaded suggested tours - your choice. Great info is included on each of the pre-loaded attractions too.

This app is SAD

After downloading a walking tour for Charleston and one for Savannah from iTunes and using them both in lieu of paying an actual tour guide to take us around the city, I am DEEPLY disappointed in this one. I should have known when the other 7 people gave it 1 star but was confused by the lack of reviews. So, I paid my $4.99 and got it anyway. While it is true that this app is completely independent of the Internet, great for iPod Touch users, it is also true that there is no "guide" or narrative. It's just 4 sentences giving VERY vague information about the site you're standing in front of. It's not even more than you would get from a quick Google search on your Blackbery. There is no speaking, no history telling or even story telling. Really it's totally pathetic. And shame on iTunes for using the term "self-guided walking app" to describe it. Half-truths are still a lie, Apple!

Thorough, but difficult to use because it's not intuitive at all. Trying to create a tour is a hassle. Not worth the price.

I couldn't even get this to function. I wound up using google maps which is free. Big waste of money. Going to see how I can get my refund.

This app did not help us at all! Get the free national park service app instead!

This program isn't was expected. It is a not friendly user program. Does not bring different informations like bus or metro stations to facilitate the walks

I thought this would be useful while I walked around D.C., it was not. Sorely disappointed! I could've bought a coffee for the money I wasted on this.

I chose the $4.99 pay versions thinking it would be more helpful. My family got upset with me for following the apps's directions. Could not even find the Air&Space Museum! A search for the National Aquarium did not return any results. Just Googling an attraction and getting direction with the map feature on my old IPhone 3 blew this app away.