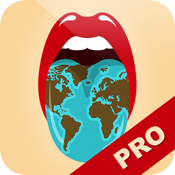 Customer Reviews of the Translator With Speech Pro App

The audio input is really helpful, but it is not available in all languages. The app works very smooth and has helped us a few times.

While I'm sure one could quibble with the translations, it helps with communication at the everyday level.

Went to Italy 2 years ago, wish I had this app then.

Works well when internet connection is super strong. If the signal is weak, it will not work even if your phone shows a connection is visibly available.

T Mike in MI's Review of Translator With Speech Pro

The app is usually very helpful, but occasionally is unable to provide a reasonsble translation if the query is somewhat complicated. If you state the query words and/or phrases simply, the app can provide a useful translation. In addition, be aware that many French words have multiple meanings (as does English), so be sure you have the appropriate translation.

Forgot to rate first review, so here is my one star

The best translator and language pronunciation tool you can find, from a long term user and world traveler. Shush a gift to mankind! Thank you!

Useful for signs when traveling or asking questions.

Couldn't understand a word without it!

iPhone 5 just keeps giving error about protecting users. Dev team was no help. Reinstalled was no help. Money down the drain. Apple needs to verify these things!

I impressed my in-laws with how much more Spanish I was speaking. Fun to use. Easy to work with.

I bought this app cuz a review says it verbally translates. Wrong! The mic for Hebrew has a strike thru it. The developers should state which languages it does & does not verbally translate. Plus, the translation is so small that the native speaker will have to get a magnifying glass to read it. This is useless. How many people are going to take the time to read the small print on my phone??? NONE! This doesn't help me learn the language. I wasted my time & money on this app. Wish I could give it zero stars.

Quite helpful but translations are often too literal Needs tweaking but good app.

I work in El Paso at an orphanage with children who only speak Spanish. This has saved my life!!

I am studying Italian. I use this app along with other online applications. It works very well. Highly recommended. The update makes it even better!

It recognizes spoken speech in almost any language, and speaks it out in any foreign tongue. Simply amazing.

I have tried to use English words translated to Japanese but EVERY time I try entering an English word it deletes English from the language selections. Actually 1 star is ten times to generous a rating for this excuse of an app.

No translator is perfect. But, I have very little problem with translations from this one. Very pleased.

My filipino friends say the words are not translated well

Very easy translator to use - quick, efficient, and for the most part extremely reliable and accurate. The voice tool works exceptionally well and have used it many times with people from other countries speaking in their native tongue. Want to communicate with someone who speaks a different language? Get this app...It's a no-brainer!

Very solid aap! Would recommend this to anyone who has a need to converse in other language. Students, business people, medical, law enforcement and on and on!!

I really love this abb and its awesome. The speak and translate is perfect.

This is a great translator. I have used in areas where there is background noise, and I still get an accurate translation in Spanish to English & English to Spanish. It does require clear speaking and proper pronunciation. I am happy with this app. I recommend it to those who need to practice a language

I love it! I think it would be even better if my phone was a bit faster..but also you should develop a speak-command app to make it even faster...also you need to do a phonetic English version for the Chinese and Asian languages because people can't read the writing...but I really love it

Very easy to use and any language you want, good voices and amazing voice recognition, in so many languages! Now recognises spoken languages as well, keep the updates coming.

Speaking as an ESL teacher who frequently uses a translator to communicate important info to students with limited English ability, I’m very disappointed in this app. It takes a very long time and multiple translation attempts to get my point across because of inaccurate translations. For example, I wanted to tell my Spanish-speaking students that they could write something it Spanish and I would translate it for them, which should have been translated to something along the lines of “Puedes escribirlo en español y lo voy a traducir,” but the app translated the last part to “luego traducirlo,” ...Which is telling them to write it in Spanish and then translate it. Big difference! There are tons of free translators out there, but I chose to pay for this one because of the rave reviews and visual appeal. And while I do like the look of it, I’m glad it was only a dollar, because I feel that money was wasted.

When my family came to visit from Japan, it made it much easier to communicate with them!!! It was also pretty accurate. I love this app! The translation from Japanese back to English needs a little bit of work, but for the most part it definitely exceeded my expectations!

I have a lot of fun with this app. I am able to communicate with friends all over the world in different languages. Even though they can speak English, just fun for them to get messages from me in their own language