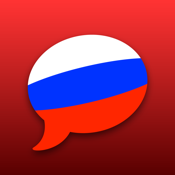 This app has been very useful and logically presented.

Good and fun app for this beginner getting his feet wet with Russian. The slow down function on the pronunciation is very helpful.

THE BEST APP I FOUND!

I never write reviews, but i need to thank the creators of the app and website, this has the best pronunciation, interface, most importantly its user friendly. All the words have the translations and transliteration (how the words sound but using english letters)! For example “Да я понимаю”(yes, I understand)( Da- Ya-pa-nee-má-yu) this is EXTREMELY HELPFUL PEOPLE, if you want to learn Russian, GET THIS APP NOW! Any language requires multiple resources, this is perfect to add on my agenda

I've been learning Russian for the past 3 years. One major reason is that I work in an all Russian company. So I hear it all the time. But now it's great not to have to ask my friends how to say this, or how do I write this. This app shows me easily! But can you please add more Friend phrases? Like I am with my friend, friend, or Who is your friend? Greatly appreciate it!

Very helpful and intuitive and understands how a beginner can best learn a language. And fast! LOVE THIS APP above all others.

I am satisfied with this app, so far I can recall phases, number, and alphabet. I want see a grammar/ sentence building for conversion version of this app.

Easy to use and understand. The best of the Russian language apps!

I like this app because your can slow down the pronunciation.

This is an excellent teaching aid. I wish it had been available when I first visited Russia!

This app has been such a great help to me in starting to learn the Russian language. It’s very well laid out and organized with varied categories. I also love the fact that you can press and hold on each word or phrase, and it will repeat it back more slowly. Excellent app!

Phonetics good to help pronounce the words , but it’s all wrong when it comes to the actual letters...

This app works great for a casual learner of Russian such as myself and anyone who is taking it more serious. The flash card function is really great for testing your progress

Fantastic and easy to learn!

I’ve used the lite version app for a while and I just now got the full, but just from the lite version I’ve learned so much, I can actually hold decent conversations with Russian friends. Or I can shout some random stuff at people in video games and feel awesome. 10/10 if I could I’d buy it again just to give them money.

awesome app, worth the upgrade to the paid version, very user friendly

Easy to use, clearly spoken words, and extremely convenient! The only thing it doesn't do is teach you the alphabet. However, it shows you the words and helps you pronounce so you become accustomed to the letters :) ... Awesome app.

So useful for traveling!

Perfect for transsiberian RR! It's I give, helps with pronunciation and has so many useful phrases. I'm so impressed.

This App is the best tool I have discovered for deepening my learning of Russian.

I had the free version of this app, i used it and it was really good, so i bit the bullet and paid the 4 dollars (way to much) and bought this app. It is great for beginners (like me) really convenient that its offline, i love it i definitely would suggest it to anyone. Thx for reading!

So easy to use. It is nice that there is the option for them to say it slower. The flashcards are great and handy as a quick lesson.

You cannot use it offline even if you paid for it.

I paid for the app for more features and it won't let me use it unless I am online.

Well designed and worth the $1.99 for the upgrade.

I have been learning Russian for a couple years now and have tested many other Russian language apps but this one is by far the best! Please keep the updates coming! Спасибо!

I like this app very much. I tested the free version then quickly bought the full version including the additional extra words package. A feature I would like would be to have a mode where the app could go through the words continuously with short pauses with or without the English translation so that I could use it hands free while driving.

Such a great study tool!

I've been using this app for a little while now and find it a valuable study tool. Organization with knowledge the app makes it easy to find your way around and the simple phrases make studying on the go easier. I like their flashcard feature as well. Overall, it is helping me improve my learning. Please keep up the great work!

If you want to brush up on Russian, this is a good, user friendly app. The slow-mode in pronunciation is helpful.

Very happy to have found this app. I especially appreciate the pronouncing guide to the alphabet.

It tells you how to say pretty much everything, I would highly recommend this app. There are also no adds 😍

I bought it without a thought.

I seriously don't understand why this app is so under known? It's terrific ! Now stop reading this and buy it . Pakã!!

Хорошо ! I take Russian in college and this app has helped a great deal. I only have class twice a week and this way I can still hear the words and phrases every day so that I don't forget them. I've aced every test so far partially thanks to you guys 😆 so glad I found this app ! I started with the free version. It was great enough to where I went ahead and paid for it and bought the extra pack ! That's a big deal for me bc I'm a broke college student lol seriously people this app is a great investment.

Well organized. Best part is the native speaker recordings of all words and phrases. Very handy. Serious students will need other resources, of course. But this app is a great vocabulary builder and pronunciation resource. Wow!

I love this app! I had the free version at first, which was helpful, then I bought the other version and it has so many other awesome and beneficial features I just love it. Free version it good, but paid for version is 10 times better! Definitely worth the 4 dollars.

I've always been interested in Russian history but only recently started to study the language. This App has been a huge help. Easy to use and intuitively designed.

Have no prior knowledge on cryllic language but app is helping me learn fast, just wish it had a dictionary included

This is one of beat app I'm using to self study Russian!

I love how you see words written in Russian, see how it's pronounced, and then see what it means in English. I also like how you can look up words and hearing it spoken in Russian.

I recently decided I wanted to learn a different language other than Spanish, which I hear all the time in California, so I did some soul searching. While French and Italian are beautiful languages, to me they're too, how should I say this, bleh. Don't get me wrong, I attempted to learn them but they just wont stick. Recently I had a flashback to middle school days, oh those were the days. No bills, no boys, no b**** which meant no bras... Oh wait, was that Too much? Any who, back to the point. In middle school my best-friend was Russian and would teach me all the bad words so when my teacher would side eye me, I'd mumble "Suka" 🙈. Holy crap! How do I remember that? And thats what it hit me. RUSSIAN! I want to learn Russian! So, initially I downloaded the free version of this app. Despite being surrounded by "Holas" and "Adios'" I was able to learn how to count to 20 after 3 days of seamlessly indulging in the app. I then decided to download the full version, and it does it's purpose. Just wish there were more informal greetings to communicate with people my age (Im 22)

I used this Russian app for several weeks. It is super useful. I recommend this app to Russian beginners.

In the first day I know a few words in russian and know half of the alphabet. I highly recommend this app to anyone trying to learn Russian other than using google translator.

This app helped me navigate Belarus solo. It was by first time to the Baltic region and it was a the best app crutch I could find.

Great set of words for any situation you may encounter on your trip to Russia. Good clear pronunciation. Well worth the price!

Love this app on the go handy tells you what you need to know.... Especially handy seeing as tho nowadays the Russians are taking over as the top villains in the latest action movies!!! Go mother Russia

I love it, easy

So great, helped me learn the Cyrillic alphabet really well

Works quite well. Vocal pronunciations are very good. It has a slow speech mode. Great for travelling.

Purchasing all the packs is reasonably priced and extremely useful and worth it.

Fantastic app. Could you include the translation for “wolf” in the animal section. Common names for men and women would also be nice. All in all, a great app.

Thought it was a dictionary

It has lots of good and useful information. I would easily recommend it.

The new update with expanded topic sections are a great improvement. The layout, ease of use make for a great learning tool. Whether your a beginner learning or experienced speaker needing a refresher. Thanks for improving the experience!!

We adopted two Russian-speaking kids and I’ve been to Ukraine several times. This is the most comprehensive, easy-to-understand source for learning useful words and phrases I’ve found. It includes flash cards for practicing and an option to slow down the pronunciation of the words so users can get it just right. Highly recommend. Downloaded this two years ago and still use it frequently.