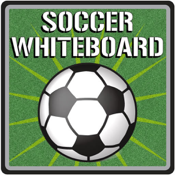 I wish I could draw the lines.

Same as the third review

Nice little app for the price! It does have a few minor bugs and could use some enhancements, but it is still usable in its current form and is better than many others out there, especially if you need smaller than 11v11. Enhancement suggestions: trailing line for ball in addition to player trailing line, multiple drawing line colors to distinguish between players vs opponents vs ball, ability to save trailing and drawn lines when saving a white board, ability to pick which half when toggling between full and half field, ability to scroll half field on iPad and/or ability to see the entire half in half field mode, ability to save white board as pic to email etc, and an undo button for lines. Ability to animate would be awesome, but looking for the above features first. Bug fixes needed: changed player position names sometimes revert to default when toggling between full and half field or portrait and landscape, custom position names do not save as part of a saved whiteboard, player markers shift when toggling between full and half field so they are not quite in the same position, a long straight diagonal line sometimes appears on the field while adjusting drawing options. Looking forward to the next release!

This app has great promise, if I could put names or initials on the player icons to set lineups (and save them), and if I could draw lines, then 5 stars.

I love this app but.

I love this app but I wish I could add the referee. I train referees and this would work a lot better for me if I could make an extra little circled icon for the referee to teach he referee positioning.

Great app. but it can get much better with few updates/upgrades