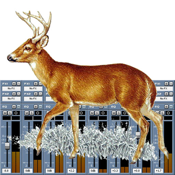 So my buddy and I were hunting in the hill country outside of town the other day, and hadnt seen a dang thing in three hours. After rolling back to our cars to shuck out of our heavy insulated camo we took a ride around one last time on his atv to see if we saw anything armed with nothing but a shotgun. As we approached one of our feeding areas he saw two does sitting literally feet from where I had been hunting all am, and they were looking right at us. Feeling like idiots for being so loud, I immediately remembered I had downloaded this app while I was bored in the blind earlier that morning, and started playing the estrus bleat and buck grunt sounds. They stood there while I literally walked up on them, and one gave me a broadsided shot from 50 yds away. I dropped her w a shot of 00 Buck, and laughed all the way to my car for killing a deer after I had used calls from my iPhone. This thing works, it's hilarious and awesome. Download it.

Ol' man of the mountain's Review of Deer Call Mixer

Liked it but now the calls went dead so it is of little value.

Definitely not what I expected! Not worth wasting your time over!

Stopped working after 3 days. Even got the update thinking it would fix it, but no luck.

Works when you buy after one day it quits app is a scam stay away!!!!!!!

Got bored on my stand and wondered what apps were available pertaining to deer hunting. Found this app, downloaded it ( took a while as I had no wifi ). Once it was downloaded, I started playing around with it using various grunts and bleats. Within 20 or so mins. of starting the app I had a 7 pt. on the ground. Whether it was this app or being at the right place at the right time I'll never know, but it couldn't hurt to have.

Terrible only one sounds anywhere close to the real thing