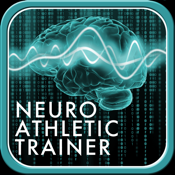 Still a five star but...

Let be this app before during and after workout! I

I have had a series of major life changing events occur over the last decade and sleep has been difficult – I rarely have had a full night of sleep. I have used this app with ocean sounds in the background with good luck – with a few exceptions, but it's certainly better than any medication that I refuse to take and if I wake up in the night, and hear the sounds of the ocean, I know I haven't had my full eight hours of sleep yet and go back to sleep – it doesn't take long. This is big relief for me! I have used various forms of brain in treatment over the last 20 years and this one, without the lights which I find extremely helpful for other reasons, works fine with just the audio… And that's helpful at night time. The only reason I don't give it five stars is that the brain and treatments it's self – hello pulsing noise – is so low that then I can't hear it very well, even with the volume all the way up. It's that pulsing sound that gives some people I headache, but that's very wear for most people and I'm not one of them. Otherwise, well done guys!

Thanks for making so many of your amazing apps free! I bought Altered States, actually, and it WAS WORTH MY DOLLAR! Also don't make that free 'cause it'll make me mad. :) Now if Dream Inducers could be free, wow. Thanks a bunch, Banzai Labs!

All of their brainwave apps are great.

I love the fact that I can play any of my music in the background. I can pre-record hypnosis or affirmations. I can play any kind of music directly out of iTunes or set up playlists and the brainwave apps apps. I bought the entire package. I find that I use NeuroAthlete the most.

Fun app, but I don't know if it did anything...

If you are looking for something to make white noise to help you sleep this might be a good option, but there are others that are probably smaller. I ran it and I don't know if it did anything special for. I would agree listing the frequencies or evidence of effectiveness would be nice.

Across the board quality. The interface is together and quick. Well done.

As far as the binaural programs go, these apps are the best (I have several). But there are two problems: 1) Why can't they consolidate these blasted things so that you have ONE app with all the binaural programs you want? Make a giant one with all available sounds and charge more, or, better yet, allow in-app purchases of new collections of sounds. Total PITA to remember which one of this company's apps has the sound you want and way too much unnecessary irritation and clutter on the device. I now have an entire folder just for my Brain Wave apps and it's silly. This problem isn't unique to Brain Wave, but since theirs is the best, I expect better! 2) Needs more background sounds and a greater ability to customize/blend sounds and save them. This developer's entrainment is better than the ones I have on other apps. But AmbiScience, for example, is way ahead customization: Far more sounds, the ability to blend several of them (rain plus forest plus brown noise plus additional layers. Even better, they all are highly customizable, in addition to the blend of sounds, users can add intermittent thunder, the occasional bird, bursts of wind, as often as they want, for whatever duration they like. And then users can save those mini programs they have created.) Brain Wave should update to include similar offerings to truly have the strongest binaural program. Still, four stars for the much stronger and more useful entrainment, which comes in 'stages' to better help users achieve the desired state. But they need to make a better user experience!

The more the person uses it, the better it works.

Improve/Empower your life! MUST GET THIS APP!!

I've been using Brainwave apps for a couple years now. When I found NeuroAthlete, I purchased immediately. This app takes Brainwave usage to the next level. I am a new Zumba instructor and these apps have really helped me focus, gain confidence, and learn new routines much faster and more competently. I also use it every morning just to get my ADHD brain organized for my usually long, busy days. Even in my 60's, my ability to learn and maintain a super high level of activity is fantastic. I run circles around much younger people and keep up with technology as well as any 30 year old, because I keep my brain finely tuned with Brainwave technology.

The maker of this app, and other apps by the same developer, fail to list the frequencies used. Unfortunately some of the other similar app developers do the same. There are a few who do list the exact frequencies used in their apps. It's important to know the frequencies used because sometimes developers use the wrong frequency for the purpose that they claim. Sometimes a specific frequency can be used for more than one purpose. Typically developers fail to tell you all the possible effects of using a specific frequency. This is an app that affects you brain. Don't you want to know exactly what you are listening to? Not knowing what frequencies are being used is the equivalent of someone giving you a pill for your headache but they fail to mention what's in that pill. Wouldn't you want to know what you are taking? I would also encourage you to find out the difference between Binaural Beats and Isochronic Tones. Many people describe Isochronic Tones as Binaural Beats on steroids. I find them more effective than Binaural Beats. And you don't need headphones for Isochronic Tones. There's only one app, that I know of, that gives you both in the same app. I can't recall the name but it's made by Ambi Science. It gives you 100 different beats and tones. And they list EVERY single frequency used!

Not a pro athlete, but for the past 6 years I’ve been working out 3 times a week. Definitely love preceding them with 20 minutes of this. Makes all the difference in my calorie burn, enjoyment factor, and recovery. I’m 73 and feel so much better than before. Words aren’t enough.

I have enjoyed using brain waves and used them as a tool to help my children with homework and against negatively altered states. The best and most used app I have purchased