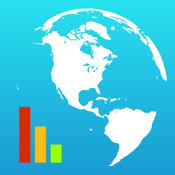 I don't know why but your map is thousand percent worse now than half year ago.This app is useless now.

Useful on many levels

The world at your fingertips! How could this not be a 5 star app? More stats than you can use. Useless you say? Until you need that particular info. Then the app stands back and says, "you're welcome".

I was shocked that it has the same info as one of my few years "free of charge" older app, it's not updated

It's a mediocre app, lacks any ethnic info, tries to squeeze everything into one long paragraph another problem is that they ignore Tibet. The Chinese have committed horrible genocide there and occupied the country, monks and nuns are still being murdered and tortured. No one talks about It, it would be nice if they treated it as a country instead of cow-towing to the monstrous Chinese but that would take some courage. I regret paying for the full version, its just as limited as the free one, don't bother paying for it.

I had read a lot about Middle East and the information here are wrong and wish if you guys do some research then correct the app, like iraq was part of utmany ampire no that's wrong it was Babylon ampire by itself , 7000 bc

The information is bountiful and well researched and it deserves five stars.

I love this handy app. It keeps me a little more informed about the world. If I wonder what language is spoken in a certain country, or what the currency or dominant religions are, I check here and get my answer in a few seconds!

The flag of Myanmar (ex-Burma) is wrong. You have to up date this app.

Very usefull to have on the spot

I just would like to add more flexibility to select favorite countries, so that we can have quicker access to the countries we more frequently need information of. I would also like to have more updated information (current year instead of 2010).