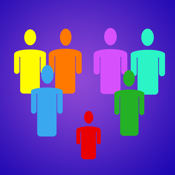 Customer Reviews of the Families App

Product loaded a 7500 person legacy file with no problems including pictures. I highly recommend the product.

This makes this product not as useful. Please help!

I am a die-hard iPad user and i really want this app to work. I don't know yet because every time I try to open it it just flashes back to the main screen. I am on the go researching and I can't utilize this great technology. I hope it is fixed soon as this app has so much potential.

Thank you. Now when I go to families gatherings, I can immediately enter information into our Legacy database and transfer it to my computer. The transfer from my computer to my iPad went smoothly. Directions are clear and the actual transfer of information for over 1700 individuals and more than 200 families took a nanosecond. I'm sure there will be many updates to this program in the future, but for now it serves my purposes perfectly.

This app is fantastic! I have been waiting for an app where I could have ALL of my genealogy info with me on a research trip. The ability to have all of your attached media and sources with you is my favorite feature. Other apps that import gedcoms are good, but they don't always import all of your info. This is like having Legacy with me all the time. Definitely worth the price! Thank you! Can't wait to use it on a research trip!

So far so good

Downloaded the app and the computer end software, synced over wifi and had my tree, photos, notes and such in a matter of minutes. (About 10,000 ancestors)

I purchased the day it first came out. Once the RIN issue was fixed for the most part it's been smooth writing. This is the most I've spent for any app and it was worth it. I love the fact that I can sync my work directly with Legacy...two great additions would be bookmarks and a generic report.

The app has been updated to include lots of information extracted from my Legacy Family Tree but the problem is that it is the absolutely most cumbersome, convoluted transfer process I've ever had the misfortune to use. It literally, if all goes well, takes an hour or more to do a simply sync because there is nothing simple about "Families." Why a company as terrific as Legacy would use this app for their iOS mobile customers is beyond comprehension. Today has been 100% wasted on trying to get the program to sync, with the result that I have had to dump it from my iPhone. How does one write Negative Stars? They don't deserve even one. It is worse than "I hate it." It has wasted too many precious hours/days trying to work the app.

Disappointed - Doesn't really sync (but there is a workaround)

Doesn't really sync like Evernote, calendar, notes, nook and others do, automatically reflecting changes made on one platform on the other - just transfers files that might as well be gedcom to and from free genealogy app, as some reviewers suggest. I suspect some reviews are by the reprogrammer, who charges too much for this app. From a Legacy webinar I learned that Legacy has an Intellishare feature that can be used to merge two files that use the same identifier for each record. In particular these can be the Legacy file and a file of a different name transferred back from the phone. I don't know how automatic the merge is, though, and it certainly is not as straight forward as with the other apps I mentioned above. However it does offer a way to cope with the deficiency I mentioned. It would be great if a true sync could be added, perhaps using Intellishare as a basis.

This is a great app. I've got a huge genealogy database that transferred perfectly to my iPad - everything seems to be there: events, notes etc I'm delighted. If you use Legacy software, you need this app (and NO I'm not affiliated with either developer)

Needs an update. When I try to zoom in on my documents they are blurry and unreadable. Adding info from Legacy seems more like converting and then downloading my Legacy info, not syncing like with Evernote or other programs that sync info. Was not worth the cost.

for $15, I expect MUCH better. very disappointed

I added this app looking for something to use with my legacy program on my pc so I could be more more mobile. This is the perfect app. For any genealogist using Legacy and an Ipad this is perfect. It is well worth the money. There was a problem initially but that has been fixed. Love It

Locked In Time's Review of Families

This is a very good idea. Unfortunately I can't get it to work. I once got my data transferred from my PC to my iPad, but then the application got hung up. I tried to get support. I was told to delete the program and start over. I've never been able to get the data transferred since and support is no help. The application has been a great waste of time for me and a waste of money. I would not recommend it.

Update: Thanks for the quick response with an update fix. Program is working again just fine. Haven't had a problem at all with this program until I updated my iPhone software today. Now as soon as I select the file I want to open the program crashes. Really don't want to lose my data!

On both the ipad and iphone, if I click on a person, the program crashes. I took the ipad on a research trip just to discover the program isn't working. Thank you.

Wonderful application! You have to be patient when the doing the download and transfer...but all my records appear correctly. Glad I bought it even though it is expensive!

Worked flawlessly installing and syncing on my iPad 2 off of a Win7 machine.

Crashes every time I try to open my Legacy file.

As an experienced genealogist with a very large integrated database and also a Legacy Beta Tester I can do nothing but praise this app. The features contain enough information to do many of Legacy's bells and whistles. I am looking forward to doing cemetery research and directly input GPS locations into burial events. In all respects this app is great....it gives the average Legacy user portability without having to purchase another expensive device and then have also carry an extra device.

As a genealogist with over 40 years experience, I am in seventh heaven with this app! All my information that is on my laptop in legacy is now on my ipod and it is so easy to navigate through the files. I could not believe how wonderful a job it did and it even included my pictures and all my notes. I have used pocket genealogist in the past on my pocket pc, but this app definitely surpasses it with ease of syncing and navigating within the file. I have found it to run very smooth and fast on my ipod. FIVE STARS plus to the developer. I highly recommend it. I purchased it the first day and I have been happy from day one. Thanks so much!!!

I've used this app for a few months. The app worked great until the iOS 5.1 update last Thursday. A fix was available today and the program is once again working!

Very good program, Have not had any problems with it, would recommend to all.

Crashes when a picture is selected from the camera roll. Crashed several times when attempting to place the cursor into a text field. Difficult to put cursor into text fields; you must click the field several times with your finger, and about a third of the time this will cause a crash. I'm running this app on an iPad II. Highly disappointing, very frustrating. I'm concerned that my effort will be lost in a crash.

This is a great program, now if the add new data bug was fixed it'd be even more great. It shuts down when I add new content but when I go back to enter it again it will let me enter it. Hope this problem is fixed soon.

DO NOT buy Families! The installation and sync features are nightmares. If you have a joint Apple account they are next to impossible. The user interface comes from pre-personal computer times. It gives Legacy Family Tree a bad name. Not a computer platform crossover.

The Nicholsons's Review of Families

Now I can finally calculate relationships on the fly! Easy to use.

Does not work with Legacy 8

I have given this app 2 stars because it seems to have nice features. Unfortunately, even though it claims to, it does not yet work with Legacy 8. Maybe there will be an update soon.

To much for to little

Costs to much for what it does. $15 for not much more than a viewer. I expected much more. Very disappointed.

I purchased it the first day it came out. I have the iPhone, it installed very easy and quickly. In my parents family I have 4235 individuals and 2200 pictures. Really amazing! JeanE

As a genealogist with over 40 years of experience, and an enthusiastic iPhone advocate, I can say that Families has provided me with a first rate, portable version of my Legacy Family Tree databases. Families frees me from carrying anything more than my iPhone 3Gs on research trips, and provides outstanding detailed information in an easily viewed format. Editing data on the iPhone is straight forward, and syncs both to, and from my PC have been flawless. The help screens are well thought out, and prompts are clear and to the point. TelGen Limited has been helpful and responsive to questions. I can recommend Families for Legacy users with either iPhones or iPads without reservation, and look forward to future enhancements.

I installed this app on my IPAD. It took several attempts to complete the first sync from my computer to the IPAD but once completed the app works great. I have about 14,000 names in Legacy Family Tree with thousands of pictures, documents and notes and all of it transfered. I was amazed at how little memory this used on my IPAD. It is so convenient to bring my IPAD in a genealogy library and have this information at my finger tips. I highly recommend the app.

Recently purchased and evaluated this software. Worst money that I have ever spent in the App Store. Learn from my bad experience and stay clear of this piece of junk!

An App that does what it claims! Very fictional! I can't say enough about how much I like it.

Families is an excellent app. It is well worth every penny. I have a copy on my iPad2 and my iPhone4. It is great to be able to carry my entire Legacy database with me on research trips or just family gatherings. Two way syncing has been flawless for me. I have never understood folks who purchase an app, then because they may be having issues with the app (usually user error or misunderstanding how a function works) they feel it necessary to write a negative Apps Store review. As has often been stated, a developer can't respond to you and assist you with any problems if you just choose to write a negative review, but make no effort to contact the developer to correct and/or assist you with your issue. If you have problems, contact TelGen. You will find their support to be outstanding. Disclaimer: I am not associated with Families (TelGen) or Legacy Family Tree (Millennia). I am just a very happy and satisfied customer of both.