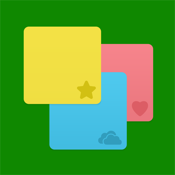 Customer Reviews of the Abcnotes App

I have bought every note app there is (yes, really) trying to find the best one for my needs. This is it. Syncs amongst my iPhone and all iPads, colorful, so easy to use, and so handy for a quick jot down of anything when I haven’t pen and paper handy. Even my 87 year old husband uses it on all his devices. Now, if they would create an Android app so it would also sync with Kindle and Nook...

I have been back-and-forth between this and other sticky note apps. This one sticked and is one the most used one on my phone. I absolutely love this app but the only feature is I miss and I'd like to see in future version is the ability to set alarm to notes.

I like it is simple and cool but it needs the office folders add on to be completed.

Syncing works well. What I wish? I wish I could just type on a sticky and not have to be taken to the "format" screen. It's an extra step that wastes time. If I'm missing something with this, please let me know!

I tried several different note apps and this is the one I liked best. It is easy to use and does everything I need. Some of them were just too complicated to be practical. I’m a senior and I need a daily reminder of what’s on the adjenda and this fills the bill!

Hello...I loved this app and used it all of the time to collect quotes that I enjoyed. I have an iPhone 10 and the app now crashes all of the time. Any thoughts or suggestions? Would love to rate you a 5 star but at present I can’t even use the app and I don’t want to lose all of my collection.

Loads fast and work great, especially in comparison to other similar apps. Thank you!

I’ve tried several sticky apps and this is the best one by far. I bought the $2.99 version and really like it.

Finally, a sticky note app that works like it should

I tried this app before and was not happy with it but I have not been pleased with the numerous other sticky note apps I have tried in the last year. I really wanted a sync feature so I decided to try it again. I was very pleased to see that all the concerns I had before have been fixed. This app is easy and fun to use, syncs quickly and seamlessly, has enough options to customize and has noteboards that I can close and keep out of the way if I want. Definitely recommending!!

It was one of the first apps I downloaded when I got my iPhone, and I use it everyday!

Use it all the time!

Great app, easy to use and looks nice too, I also like being able to separate my notes on different pages based on different topics or needs. Thank you for a terrific app!

Everything you could want in a sticky note.

I love this app. It is a quick and easy way to jot down notes of all sorts. Great as a reminderand a grocery store list…

I use all kinds of task managers & TDLs but this is the one I use as a quasi lock screen (sleep phone in the app, so it’s the 1st thing you see when you wake it) on my phone, when I have errands to do while I’m out - especially the uncommon ones I might forget during a busy day. It’s perfect & customizable enough that the geek in me enjoys using it. Thank you!! Just right for the purpose intended.

J A Austin's Review of Abcnotes

I depend on this app quite a bit to keep me on track. I appreciate all the different desktops and different designs and colors to keep it fun. Its versatility and ease of creating and editing notes make it a real asset!

I use it every day. Love that it syncs to my phone and watch

Love this App. Love it....can jot and save real quick Only need one at a time Love to mix them around Reminds me when I see it Just love this app best for notes....ever Easy to get your notes and find what you are looking for.. Don't change it....."..thx so much

Pros: colorful, lots of formats and backgrounds, tools to resize and edit font, syncs with computer and tablet instantly. Cons: can't switch order of desktops, have to double tap to edit, can't see other notes while editing a note, can't dictate notes, does not connect with Apple reminders.

I installed some others but I deleted right away but This is the best, I loved 😍

This easy to use app continues to make my life so much easier. I love the way you are given up to 15 easily custom made "note boards" to categorize your stickies which you can choose to make various colors, styles, & fonts,. But my favorite feature is the way it SO easily/quickly/accurately syncs my iPhone, iPod Touch and iPad! The number 1 feature I must have is dependability. I have been a user for years now. Keep up the great work!

Write a message or a grocery list and it will be duplicated on all of your devices. Easy to use and a million things to use it for. I highly recommend this app to everyone.

Took the update and lost all my notes.

Having been using this app for years to quickly add books to read, movies to see, people's names and everything else.

Does everything it states in an easy to use interface. Kudos

Leep of faith's Review of Abcnotes

I use this app daily. It's just so simple to use to keep track of your list of things to do. Finally something uncomplicated.

Live and Grow's Review of Abcnotes

I like this app because it is stable, efficient, offers a lot of options, and because of its capability for syncing. The desktops are a bit loud for my taste, and I would prefer more simple ones. I am more interested in the content of my notes than in the design on the desktop that lies behind it. In addition, the elaborate desktops are rather h****** the eyes. My one “beef” with this app was that it offered so many choices — particularly, of note styles and desktop backgrounds — but most of the choices were not ones that I prefer. I discovered, however, that one can import photos for the desktops instead of using the ones offered. I took screenshots of the various page backgrounds offered in the native iOS Notes app — lines and grids of varying widths — and then imported them as desktops for ABC Notes. Now I have 15 desktops that are either plain white, in soft colors, or that use the traditional lines and grid page-background patterns. All of these are very well suited to my taste, which increases my enjoyment in using the ABC Notes app.

Great for people who like things color coded. Use it all the time! Great app

I used the app less than two minutes when it started hounding me for a review. Here it is!

Use it all the time You can name it

I purchased the app, where are the 45 skins ?

I purchased the app. On the app download page it says there are 45 skins I don’t see 45 scans. Where do I find the 45 skins? I only see a few skins. I think I’m missing out on some purchased features. If somebody can help me find these features sure would be nice

This is an easy to use app for quick, in-the-go organization & reminders; easy to personalize the look of notes and desktops. Definitely worth the price for the full version.

Great little place to store all reminders. No longer use paper and pen todo lists.

Awesome app and very easy to use!! Can color code notes, easily edit them also!!

Have used for yesrs

It's perfect for my aging brain. Grocery lists, people's names, things to do and where I put things I know I'll be looking for. You can title your notes, a choice of fonts, desktops and color to help you sort things in a way I have always used, only digitally and under the passwords of my devices. Same info on all devices too. Very convenient.

2.99 and it freezes during every use, do not waste your money...

Take notes on the go and have them waiting for you on your laptop at your desk!

This is a great App for all types of people. Flexible and easy to use. Recommend wholeheartedly.

I've been searching for a good Sticky Note app for months. My search is over. I can't imagine anything better.

I've had more fun with this app

I love creating notes for my phone and computer that I can turn into screen savers. This is a versatile app that is easy to use.

The most beautiful sticky notes app in its class. Its got fantastic features, content, and user interface! Definitely 5 stars.

I use this everyday!

I love this and use it every day. I show it to people and then they go get it on the spot. Long to-do lists can be intimidating and you turn away from them. This is fun and it is one at a time. Do-able and satisfying. Can’t tell you how many people I have shared this with who have then shared it with others.

Best note program out there.

The best way to sync stickies to Mac

The interface is a little clunky—in particular, I wish there was a way to view notes one at a time and swipe through them. But other than that, it's pretty great. It's practically the only way to sync sticky notes to the Mac (though it doesn't sync with the built-in Stickies app, and the one it provides won't show stickies without a background image). It's extremely customizable, which is cool.

Very pleasant and attractive appearance for my to do lists and other reminders.

Keeps me so organized

Love this app!! I had the free app to try it out to see if I like it but then had to pay the $2.99 for the app because the free one had tons of ads and it was driving me crazy! Definitely worth the 3 bucks to keep my to do list at my finger tips!