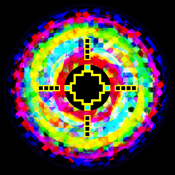 Customer Reviews of the Luminancer App

This is truly a really really fun and interesting I love it.

Sometimes when I put a video for my camera roll in it it crashes but overall it's a really good app just please fix the crashing thank you.

Finally a way to get 80's video tape feedback effects in the future and beyond!!!!

Doesn't work at all. Won't use my camera at all just shows up as a dark screen.

I wanted this app to be able to do one thing, and that was to create a Halo affect around an image in a photo. If it actually does this I cannot figure out how. There are some interesting effects but nothing that I want to use

So the first review I saw was from the person that says you can’t save a video..... YOU CAN, you just have to hit the record button while watching the video lol. So you can start watching the video, pick a place to start recording and a place to stop, and then it gives you the option to save. I haven’t actually recorded a video using the app, so I guess we’ll see how it goes. I also saw in another review someone said you can record anything longer than 2 mins but why would you? No one is going to watch anything longer than like 30 secs lol plus you can use your phone camera and record a longer video, then upload it to the app and pick the section you’d like to save.

Just bought my iPhone 6s 128gb and this app. First two videos, app crashed as soon as the phone auto locked twice in a row. I shouldn't have to turn auto lock off to make it work 😏

I'm giving it 3 stars only because the app in theory is amazing and I'm having a lot of fun with it. But I'm also very frustrated with it because I paid for an app that 7 out of 10 times won't play back the video I recorded. So I shoot this video after experimenting with the special effects and then it loads indefinitely not allowing me to view it. If this issue is resolved I will be more than happy to give the app 5 stars!

Saves in my phone upside down

I love the app, but the fact that every time I save a video it records upside down to my camera roll. Then I have to download another app to flip it. PLEASE FIX!

I downloaded it and the first time I used it, it crashed 3 times. My phone would lock and it would say error and then it wouldn't save to my phone even though it said it did. I would really like to use it and check out what it has but It keeps crashing.

This is a very innovative app. It's the best I've used for creating trippy images and videos. It's a great tool for creating psychedelic art. Highly recommended and I'm looking forward to new versions…

This app is amazing. I love the fact it's an affordable video manipulator. And it's trippy as all hell! 💗💗💗💗💗

This app is worth the money. Trust me. If you don't believe me look up this app on YouTube or Facebook.

Its a great app

It does a incredible job with very good features... As a big explorer of image creation, i would like to suggest somethings to increase the power of controlling light. Maybe an exposure slider and locker would be interesting to control light and work with the effects... Also if was possible to import clips from library... I imagine if i was able to select the "main color" that i want the effect to apply with touching the screen or even even a color pallet or slider. Anyways, i bought the app because i saw a really good result and potential! Thank you for the creation!

I bought this app lastnight and it worked fine. Now for some reason it doesn't stay open for more than 1 second. Constant crashes waste of money.

The only thing is that my videos save upside down for some reason...

I don’t know if I’m just dumb or if there’s really no save button. Someone help

Lots of fun, especially for those who love a psychedelic touch to their photos. Take your time and play around with app, I'm still discovering things!

Unreliable, every time I use it it crashes. Very disappointing especially since it's a PAID app. I counted on it to work correctly. It hasn't not crashed once I have been able to use it since I bought it. Please fix soon.

Great app. 5 stars if you could use a video from camera roll.

Too cool! Especially for videos of me spinning lights!

Crashes. Giving 1 star because you can't give 0.

This app is cool in its effects but I can't get anything saved and it crashes after a minute or two. Once you actually get it through a minute of recording library videos it still has trouble. Your video comes out upside down and has an error saving to your phone library. This app needs a HUGE bug update.

I liked the old version although clunky. As for the new version...Wow! Great UI, and love that you can now import video.

I've had this app for years now and there are definitely still things that need to be worked on. Overall it works great for short videos, but I've found that I cannot save anything that is longer than about 2 minutes. The app gets stuck on a loading screen until it crashes altogether, and there is no way to recover the video you just took and lost. There needs to be some type of backup so that in the event someone loses their footage to a crash they can go back to it. Another downside is that, while you can upload your own video and watch it through the app with the effects, you can't save it. You can only take photos while the video plays, which doesn't make much sense to be honest. Other than that, as long as you record short videos it'll work. I'll be honest, I'm sorely disappointed in the lack of things that really should have been common sense.

Awesome app I love it but I hate that it always glitches and randomly doesn't save videos. I also don't like how it randomly refocuses and causes the video to be blurry. I feel as though the camera is not as good while using the app. Overall the app is awesome! Just very frustrating at times. It's definitely worth the purchase especially if these things get fixed 😊 I also wanted to say that I did turn my auto lock OFF and still the videos do not save sometimes 😥

I figured out the "crash" issue read this it will help

Just wanted to post this for those of you that have the Luminancer app and it keeps crashing. Go to your general settings and turn the auto lock off. This is what shuts the screen off when your phone goes idle and causes this app to stop recording.

This app is awesome sauce! Been testing it for a little bit. The effects are nice. It has and crash yet despite the last review and I'm running a 6+. I think it's really cool. I'd absolutely like to see more effects in the future!

Really cool app I love it but often times the video you love won't save. :/

App has changed in a bad way.

Honestly I want my money back. The app used to make trails on everything. Like if you wave your hand in front of the camera there would be trails behind it. Which was awesome. BUT NOW....it seems they took everyone's money who bought the app, and then downgraded the software and made it pretty much worthless. No more trails. I got this app to make hoop videos for my girlfriend. Now it's just stupid. Completely useless. I thought the updates would make it better, not worse. Is it cheaper to run the app like this? Or did y'all just make a silly mistake? Either way it's a bad choice. Give us back the old Luminancer and I'll be happy!!

Bought this app in hopes of using it more than once but this app continues to force close and will not save any of the edited versions of my videos. So I only successfully used this app once. Really unhappy with this app and wish I wouldn't have spent any money on it.

This app is so sick. I miss the ability to just take pictures in addition to videos. Still- awesome.

This is the best app I have ever come across.

As a glover this has allowed me to become so much more experimental with my shows and even turn finger shows into light shows. Highly recommend for any sort of flow artists. Love it man, great work!

It's a good app that has great effects but the only thing that's making me dislike it is that it won't save my videos. It's so annoying that I will do the best video and I can't even post it anywhere cuz it didn't save. If I'm spending money on this app it should at least do its purpose and save videos.

Pretty upset I wasted my money. None of my videos will save and it crashes half way through recording.

the app doesn't let me set the phone down and record. every time i try to do so, i'll go back to check on the video and my phone will have gone black and none of the video saves. please fix this!!!!!! :-(

Bought the app thinking it was solid. Very neat features. Took the most epic video ever... and then it didn't save. Sometimes the videos save and sometimes they do not. There are bugs that need to be fixed!! The app also crashes regularly. *very buggy* I will give five stars once these bugs are addressed. Thanks.

Need to re add clear feed's Review of Luminancer

I really love the effects but the fact that i paid money for this app and it is not loading the videos i take makes it a RIPOFF. I have been waiting longer than 15 min for a 3 min video, a few times, in Which my video never loads.

This app does what is does well. I love music festivals and all the different flow arts that come with it. This app is absolutely perfect for any of those people who enjoy gloving or any other flow and would like to add a nice touch to their recordings.

This app doesn't open at all for me. Every time I try to open it it crashes..

This app is fantastic for creating media to be used on projection and LED walls. I hope the developers plan to incorporate an input/output feature for external ins and outs. More effects and being able to store presets would be awesome as well. Favorite app of all time by far.

I love this app!!

This is by far one of the most fun apps to play around with. If you want to take psychedelic pictures, this is the app for you!

This app is amazing - I use it for making art (mobile editing) - I hope the developers continue to develop this gem! 👍

Love this app. As an artist, it's very creative and useful in many things I do.awesome photos, even better videos!!!

The first day I fgot the app it worked perfectly. Now whenever I go to take a video it stops recording in the middle of it and nothing is saved. I really wish it would work because the effects were awesome. Fix this please!

This is a good app but when I hit the save button an error message pops up and It won't let me save anything I record.