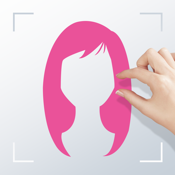 Waste of money. Do not buy. I repeat do not buy. And if the company reads this, I will gladly accept a refund. This is the worst thing I've ever spent money on. Trust me.

The styles are ugly, outdated, and there are few options. Not realistic at all.

The constraints on the hairstyles are locked, so unless your face shape is the same, it doesn't work well at all. Recommendation is to allow for stretching of the hair image horizontally and vertically.

Not for all ethnicities

This app is definitely not fit for black women. I just wasted $5 in this app! Wish I had read thru the reviews before purchasing. Very upsetting.

When I upload a photo to use, the hairstyles do not fit correctly around the face I'm using. Just bother useless app I paid for.

This application shocked me at first! Very very good application for your pictures and entertainment !

Great app. Very funny. All my relatives and friends want use it all the time.

This app helped me pick out a new hairstyle

This app worked fine for me. I liked the variety of styles to choose from. I wish I could've adjusted the hairstyles length wise to accommodate a longer face shape, though.

Not enough variety of styles and color

This was a great deal of fun to use while contemplating a new hair-do. It would be helpful to number them and be able to play with the colors more. Different shades of blonde, brunette, etc. the bright colors are fun for younger users too. I would rercommend this app wholeheartedly!

Its very nice program Thanks a lot

Why do I bother writing a review! Nothing has been done to fix this absolutely atrocious app. I am furious. I have both apps. When I use the erase tool it crashes. Also this app asks if I would like to download more hairstyles and when I press sure it flashes fails to connect to my internet. Every time I check my ipad it connects to the internet with no problems. Please fix this ASAP ...FYI check the reviews others are having the same issues.

Would be better if you could choose both hair color and style, though.

I wouldn't recommend this app. Not worth it

Thought there would be more for price. No highlighted hair. Pretty much just a game for kids to play now

Simple to use and fun hairstyle try-on app. I especially like the eraser and multiple hairstyle features. Lots of colors and styles to choose from in the Pro app. Only other feature I could ask for is ability to stretch hairstyles to make wider or longer.

Hardy any hairstyles, no face recognition, just drag and resize. Pure crap. What a waste of money.

This app made me look like Dave Grohl... I created a fake Instagram of Dave Grohl and now have 30,000 followers. All because of this app.

Few styles with bangs. If the style you choose had red hair it will not change to blonde no matter how hard you try. If you cut the hair then go change the color, the haircut is removed. I could go on and on. Total waste of $2.99.

Very nice program. Funny. Exceptional. I recomended it to my friends. Thanks for creating this wonderful program

If this was a free app I wouldn't be as bothered but these people charged me $3 big ones for an app that doesn't work. Uploaded my picture and then tried to add hairstyle but every time I clicked over to add the hair on my photo the photo would either be in upper right hand of the screen or way to big for me to add hair and couldn't resize picture.

Wow! I was ripped off for $4.99. Instantly deleting this up. Terrible choices, terrible options with changing what's given... Just overall terrible app.

Terrible selection of hairstyles. Hard to use.

Any nn not taken?'s Review of Hairstyle Makeover Premium

Not worth the $$$ if you are seriously trying to find a style that fits you.

One of if not the best hairstyle apps

Not as great as it could be...

After first downloaded Appdicted's free styling app for ipad and iphone, I purchased this app because it's made just for Ipad and had a low cost relative to the number of advertised styles. I hoped however that they would have made some improvements to the color feature over the free version. To my disappointment there was no improvement in that area and color options are unnatural and rainbow-ish! It doesn't allow one to experiment with different shades of brown, blond, or red for instance, but if you want purple, hot red, yellow, and pink, they've got you covered. Also, I've begun to get the sense that there are not as many styles actually as advertised, many seem to be the same style in just a different shade, or with the slightest variation that they appear the same on first glance. Another thing, the, styles aren't numbered, so you can't revisit where you left-off easily. I had to just leave the program running throughout. Lastly, there is no option to create a list of your favorite styles within the program, so if you want to refer back to it you have to save it to your photo album, email it to yourself or post it to Facebook . I've since downloaded The Hairstyle Pro app and have found it to be far superior and worth spending a little more on.

For $4.99 I was disappointed with only 40+ options for short female hair. Even with the options for editing the style, it just did not work for me. I guess I expected more out of current technology.

This app has not worked properly from the moment I downloaded it. It does not let you select the hairstyle, it just puts whichever one that pops up onto your photo. Don't waste the download!

One of my favorites!

This app is simply the best! The developer made the most incredible hairstyle app out there! Several hairstyles to pick from as well as tools to customize them to suit you. Download it today! It will quickly become one of your favorites! I love LOVE love this app!

Crashes every time loading photos and even sample images on iOS 7. It doesn't look like it has been updated in a long time. Wasted my money.

Don't waste your money or time

What a rip off. Sad there is no refund button. This was supposed to be the premium? 183 styles split between short, medium and long for women. Joke

This app is great for trying out a new haircut.

Better than the rest, trust me!!

Not worth the money. Does what every other app for this does.

Does not give you a representation like you would think. Proportions off on hairdo and makes no sense. Don't waste your money

I expected more from a paid App. It did have lots of hairstyle but was very poor in hair color choice. The few hair color choices you do have rarely work. I've tried several styles that came in a darker hair color but wanted to change it to gray which was offered, since that's my color and never could get that color to work. To get close, since gray didn't work I tried to use the blonde and it only worked occasionally. I'm going back to 365 (free) which offers more choices in colors and even gives you makeup choices. Really wasted my money with this.

Easy to take a selfie and use with selection of hairstyles. It was helpful to use tools to lengthen or widen to fit face. Wish it were easier to select next hairstyle and color. Grey selection was awful.