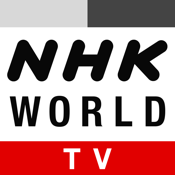 Notification preferences do not save

Seems to be a glitch but app notification preferences will not save. Checked in master settings and allow ALL but an error sign always appears and notification selections always revert to none. This needs to be fixed.

AppleTV: Why can't I scrub video?

It was availbale with the old vesion of the app and it's avaible on the web brwoser interface. But why can't I scrub video on the AppleTV? This is a critical missing feture. if you have to come back to a problem later you have to start from the beginning. Or did you miss something? too bad you have to start over from the begnning to try and catch it again.

I just left my cable provider to get a better Internet bandwidth, and was left wondering how to get NHK. None of the streaming providers appear to offer it, so I was very pleased to see this app exists and allows Chromecast. Excellent!

No FF or RW

Love the content, but the lack of rewind or replay is bizarre and annoying.

nhk is the best channel in the world

i can't believe this is free *cries*

I agree with the other reviewer, I love NHK World TV and prefer the older app because it offered more episodes to choose from than the new app. For example Medical Frontiers now only offers one episode to choose from when the previous app offered almost a half-dozen. Plus the episode that's airing isn't the one being offered. I used to send my friends to the App Store to download NHK World TV, then tell them to go to the Medical Frontiers listings and watch a particular episode I knew they'd be interested in. Nope. Can't do that anymore.

Great app. I love Japanese food and crafts. This app and NHK offers some very good documentaries on food and culture. One suggestion: I think the app should not start auto playing the current show every time you read the details of a future show and return to the main page. But, that’s a small nit. The app is wonderful and the NHK programming content is wonderful.

Great program but video quality (bit rate) is too low. Too much compression pixelation.

This has been our go-to app for all things Japanese for years but the latest version release on AppleTV and on the iPhone has for some reason disabled fast forward and rewind. Normally it’s not a problem but is very problematic when watching Sumo where the matches are often so quick that it’s easy to miss the action.

The is showing current programs that are three days old. I can see today's program lineup.

Love watching programming from my home. But the menus and interface keeps becoming more confusing and clunky.

I live in America, but I am fascinated by Asian culture. Having this wonderful and mostly positive news source is a great way to start the day in good spirits all for the price of $0. I watch this on my antenna at home, but this app provides the same channel on the go. All you have to do is download, so there shouldn’t be any hesitation. This is my absolute favorite and I hope it never goes away. Thanks to all the creators for making this happen on the west side of the world!

NHK is one of my fave cable stations. If I’m watching a cooking show such as dining with the chef, when a recipe I like is shown , I just take a screen shot and save it. Sometimes do the same with maps or beautiful objects or scenes.

My bucket list (dream) would be to visit Japan. NHK has brought the everlasting light of Mt Fuji into my life and heart. I am a veteran of the US ARMY 1967-69 IRAQ 03-04-04-05-09-10. I am 70 years old. Japanese soldiers (God bless them) serving in WW II were also 19 years old. Your prefecture segments brought home to me the great loss suffered by so many mothers and fathers, brothers and sisters.2. The kindness, love and sincerity I have and continue to witness on NHK is heart warming and everlasting. The segments on the bicycle tours,train tours,science are amazing.I would be very proud to have been born under the Rising Sun. I am doing my best to acquire knowledge of Sumo. The Daily televised tournaments are AWSOME. NHK is without any doubt my one and only favorite media.Thank you and God bless you all and Japan.

This is the best tv app

It is always a pleasure to open this app and explore Japan with news and culture! I love this app as much as I love the tv channel! I have to thank my mom because she found out about NHK on tv and ran over to my room to show me haha! Sadly the shows are only an hour, but this app fills my "appetite" for Japan! 😊🇯🇵💕ありがとう~!

The new design is just ok with no theme option either white or black as the previous one.

Great app and intuitive I should suggest do low auto-streaming for low bandwidth Apple TV users. Thanks

NHK was long a family favourite. Their English service nowadays is pretty basic, however, functioning mostly as a travel brochure for Japan. That’s nice enough. But I miss some of the programmes they used to port from regular NHK such as Minna no Uta, but no longer have. And their Chinese service seems drastically scaled back of late. Under the “multilingual” heading, one can access some programmes under simplified Chinese, but only one under proper Chinese (正體中文). This is the same with their website, which is odd as all they need is to automatically convert. NHK World is alright. It lacks some of the quirky character of yesteryear, somehow. But good that they keep producing.

The English alerts are very useful for travelers and expats. A very considerate feature.

Minus one star because you can’t scrub through video.

Please make it possible for me to see news feeds on my iPhone, I hate Apple news app! Ps I love NHK news!!

I've visited Japan twice and always come home wanting more. Recently discovered the NHK World app for my iPad and for my AppleTV. From news shows (without any kind of typical western slant) you can keep up on newsworthy events from Japan, Asia, the USA and the rest of the world. Some of the news anchors/reporters don't have the typical western polish, but honestly, I find that very refreshing. They have many shows designed to inform you about Japanese culture with a heavy emphasis on travel. The iPad app also has access to basic Japanese language learning and lots of fun shows that will introduce you to Japanese culture.

I finally found a news app I like! Ads are few, news is objective, and the English of the reporters is quite good. Even though I no longer live in Japan, I love how NHK World informs me of both Asian affairs and major US dealings.

I like this app a lot I can see all of my favorite programs like core kyoto and design talk plus Anywhere in my home.

Very high quality VOD content and it's all free! I watch it almost every day *****

Before I watched my first show, this happens. A error code pop up message thingy. Tapped on retry, then works! But the pop up is.... BAD! BAD BAD B A D! Please fix the pop up! Oh. And here’s another one. THE "No internet connection" POP UP! Please Fix That NOW!!!!! Don’t forget about Adding nhk E-tele shows like "Inai inai baa" and "Okaasan to issho"! Ok? "I get shocked sometimes." - Yoshiko Yips

PLEASE update or fix the app for windows 10 desktop PC! We love this app!

Great program. Navigation is the problem.

NHK has a great programming. But this app (on my Apple TV) doesn't allow some of the features, like forwarding or repeating. So it gets challenging when you are trying to learn and listen the contents several times.

You can try NPR, BBC and other apps. But for those with interest in Japan and Asian Culture there is nothing better than NHK>

I thoroughly enjoy NHK’s unique perspective on news events, and consistent promotion of Japanese culture. The only thing on my wish list for this app is the ability to share individual stories via text, e-mail, or social media. Currently there is no way to share stories seen in this app.

Warnings only in Japanese?

Warnings only in Japanese? Really?

I hate the new design for tvOS

•Cannot skip or go back when picking out a show to watch. •I prefer the previous version.