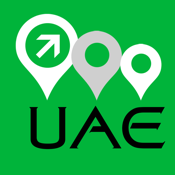 Needs significant Improvement to be useful

This application is not interactive. Yes, the description says the maps are for offline use. However, it also says "Real-time" GPS Tracking Capability. In truth it doesn't even qualify as Near Real-time. I have been frustrated with the native iPhone app because it is very often slow to respond with current location/direction/speed information. At times (usually when you need it most) it doesn't update at all and you can easily get lost before it ever shows you where you are. I was also looking for more up-to-date maps and could use something that is completely off-line as long as it shows current roads. Anyone who has driven in Abu Dhabi or Dubai knows even a full GPS system is useless at times because of all the road construction and barriers. UAE Map has "postage stamp-sized" maps that allow zooming to street level but zooming out very little. The Dubai map extends only from Palm Jebel Ali to downtown, Abu Dhabi map extends from downtown to just east of the international airport. Even these limited geographic areas would be sufficient, as they contain quite a lot in the way of restaurants, banks, etc., if only these were contained in the app. Locations are EXTREMELY limited. (Dubai: 1 Bank, 18 Eats...) Dubai indicates 307 Roads but the app lists only 13. Abu Dhabi indicates there are 97 available but lists only Yas Island Road! The most important road in the UAE is Sheikh Zayed connecting these two cities and the maps are separate so you can't see your progress (or breakdown location!) when traveling from one to the other, which MANY people do every day. One can't expect a whole lot for$2.99, but I expect an app to do as advertised. I've never tried to get my money back for an app I downloaded from iTunes App Store, but I'm getting ready to figure it out.

Does not know many important places. Save that money for roaming internet and use google :(

Useless software and they classified ot as free then ask you to purchase unlock code, we have to respect the people mentality

GPS is not working with this application

The application is good for searching points of interest, but not useful for navigation or for synchronization of position on the map.