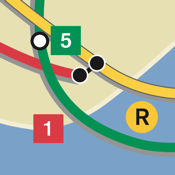 There are many more subway lines with arrival/departure times than this app shows. Please keep Il with this. It’s very frustrating to not have live subway times in the app on lines that have them.

Such a great app recommend it to anyone who is from New York City or a tourist to the city. Now, it has bus info and that is great. I loving this app more and more with the updates. Only question are there any plans for an update to support the iPhone X resolution. I love the app. I been using it since I had my iPhone 3G. Thanks

Good but needs an update!!!

This app is great .. you can see the nap in the subway without internet.. and it works pretty well overall.. the only thing I have to say that’s negative is that the map hasn’t been updated since the 7 was extended to Hudson yard and it’s missing the 2nd Avenue line... IF THEY FIX THIS I SHALL AMMEND STAR ALLOCATION... perhaps even to 5 :) but yeah if you’re not going to the Ues then it’s cool

Is this app even alive anymore ? There’s no countdown for the Lettered Trains as it’s being installed throughout. You developers are slacking hard

Considering this is a paid app, it’s totally unacceptable that this app hasn’t even received better support for iOS 11, let alone iPhone X support. So many components and frames of the app are out of place. Please make this app great again.

Not great for one-handed use but still my goto app. For years I've wished when you pressed the 'locate' icon it didn't zoom in to a uselessly extreme close up requiring you to use your other hand to zoom back out, so I also question how ongoing development is.

this app used to be worth the money, but now it’s trash. the delay notifications arrive late, and i no longer receive push notifications (only badge app icons!) or alerts. so many formatting issues with the interface as well. i’ve sent countless customer service emails, to no avail. what’s the point? i believe that if you pay for an app, you deserve to regular updates and timely troubleshooting. i’m so disappointed.

Save your money. The app never tells the right time of arrival. NEVER

Seems to be out of date, the app is not reliable.

Since the newest version of this app back in Jan 2017, dozens of subway stations have added subway time. This app, which is a little expensive, has decided to not include them. Are they not updating these changes because the app is in legacy mode? Or are they too lazy to add the new changes until the MTA finishes by the end of 2017? Either way it’s unacceptable for a paid app.

Lifesaver app, with a suggestion.

UPDATE: seems that support for this app is waning. New lines do not appear on Street map, New live arrivals for alphabet lines are not supported. Still a good app but aging and developer seems to not be interested in keeping on the cutting edge. Works without a data connection, critical for the subway. Would REALLY like updates that indicate which stations now have cellular service. Also it's a little difficult to tell what trains turn local late night, which would be particularly useful. Also the update may have removed the neighborhood labels you used to see at certain zoom levels could those come back?

It's the bane of the classic app. The developer hits after release, but a couple years and mucho dinero later, the developer gets bored and ceases to pay attention to the app. Apple releases an iOS update, the app breaks, and maybe three months later the developer decides to update the app over binge-watching something on Netflix. As it stands now, iTrans NYC Subway’s developer has no interest in fixing this apps notifications, which WAS the only thing to set it apart and make it useful.