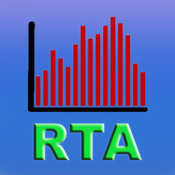 Customer Reviews of the Rta App

I was hesitant to buy this app, thinking there was no way it could be remotely accurate. But since it was ten bucks, I figured it must be somewhat professional. So, I bought it, played with it a little, and then tested it against my analysis rig. I use smaart v.6 with a sound devices usbpre and an audix tr40a mic. I set up my rig and tested this app against it and was blown away by the results! It's very accurate considering the hardware it uses, and is a great app to have as a pocket rta. It's not as accurate or in-depth as smaart, but it's handy and is less than 1/100th the cost of my setup (not including the computer required to use it.) Overall, a great product. I have since bought studio six's tone gen and polarity check and am pleased with them as well.

A few months ago this app was updated to compensate for the iPhone's microphone not being able to register the 20Hz - 35Hz range. Since that update (including this last update) the app has way over compensated in that area. I would like to use this app and trust it, but as of now, it's too hard to tell whats accurate when there is constantly a curve upward from 35Hz to 20Hz. It's a better app with the mic's natural roll off. Please fix the compensation or return it to how it used to be. PLEASE!

Not worth ten bucks.

This does not work as well as I hoped. What a waste of ten bucks. I wishbthere was a lite version of this I could have tried first.

When will this work again? It was great with iOS 6 and before. All it does now is freeze when it is opened.

I liked it more before the last update. Now 30% of the screen is being used for unnecessary toolbars and buttons. The iPhone display isn't exactly large to begin with. Looking into other apps now unfortunately...

this app combined with the switcheasy 'thumbtack' microphone makes a very, very accurate method of tuning in your car stereo. when results are compared to an expensive audiocontrol RTA, the margin of diff. is negligible. i highly recommend this app. btw, the microphone sold by this company is also excellent, and an even better match then the above mentioned mic.

Title says it all - works well, easy to use and self-explanatory. This should be on every sound engineer's phone!

I calibrated a rig of 6 jbl Vertec 88's and 4 80's per side, driven by Lake. And then compared it with a reading from my DBX rta mic. And I must say I was very surprised. It did pretty good. It does lack response above about 12k and below about 40hz. But with the externel mice coming in February. It will be an awsome thing to have

Nice. But would be even more useful with NC and NR curves as well.

If you know what this is, BUY IT!

Extremely handy tool for the audio folks, an RTA in your pocket. iPhone is somewhat limiting at a mere 105dB max and noisefloor of 28dB on my phone but for most basic quick tweaks, this will do the job. Of course if you get a real mic, this app is priceless. So Nathan and Luke, stop reading this and buy it already :)

This program is so worthless

This program puts on a nice light show but thats about it. After noticing a distinct difference between speach response curves as compared to my Frye Box (A $7000 sound analyzer used for hearing aids and speech mapping) I decided to check the calibration of the program and it's awfull! A 1KHZ Pure Tone shows up as a nearly 4khz and a 250hz tone shows up as 1.5K. There seems to be no way to calibrate the program either. This program is waste of $$$ BEWARE!!!

perfect for what it is

I am a pro audio engineer and this app has proven very handy for nailing feedback problems on live gigs and frankly has saved my b*** a few times helping me quickly rough in a system eq while the band's set has already started.

I've been having crashes ever since I updated my os.

I've been a professional sound man for 30+ years I've seen a lot of gadgets some work and some don't but if you need good ball park measurements this app is what you need. I've tested it against my DBX RTA, Signal Scope and Mac the Scope on my lap top and it's accurate if you calibrate it properly. It's a good app for spot checking a room before you set your system.

I am a Latin Grammy winner music producer, using the RTA to tune every room where I mix, and I am getting excepcional results. I was not convinced at first, but after listening to my work on the radio, I trust the curves to the "T". Thanks guys for creating this great tool!!!

Great app! I wish it was updated for newer products(iPad models, iPhone 5, etc.)

The app ran fine after OS4 upgrade, but started crashing after last update of RTA was installed.

Others have already stated the strengths of this application. So I'll just restate how convenient it is to have it with me at all times. You never know when you might be called upon to ring out some stage monitors....

Great app so far. Does what it's says but I hoped it played music from my iphone and ran this app at the same time for $9.99

IPad, not so much

Does not view properly on an iPad. Issues. Works great on my iPhone', but look for another solution on iPad.

Good, but FFT is better (I guess)

I was at work (I'm a live sound engineer) and we were discussing speaker phase, when I said "They should make an app so you could test spkrs with iPhone." It didn't take long before I found all the Studio 6 products. I now have SpeakerPop, GEN, SPL, & RTA. They all work wonderfully. That said, I was a little disappointed to learn about FFT. It's not made too clear in the descriptions, but FFT is basically a more accurate & detailed version of RTA. I wish I'd bought FFT, since I want the most accurate thing availible. However, I'd already purchased RTA, & because of App Store rules, I can't trade it in towards FFT. If you're going to spend $10 on an app, you are probably going to use it for work like me, so splurge & get the $20 FFT. I am debating it, my main hangup is that I've already spent $10 on the RTA app.

Have been using it to tune rooms for small concerts, as a pink noise source and analyzer. I keep it running during the show, and it really helps isolate feedback. Haven't had the battery issue that the other reviewer had, but I just make sure to exit the app when not using it. Great work!

Great app, works well, real easy to use and easy to calibrate. If you are looking for an inexpensive RTA this has got to be the one.

Great tool for the money. I use this app for quick references during every live show.

nice rta...be nicer if there was a pink noise out

Just saved my bacon. Have a Trane Centravac chiller making a whine noise. This showed it is an 8k whine at the compressor. Now I have some data to go back to Trane with. I csn use this im my small audio room in my house now for some frequency readings. Its worth the dough.

Fixed 1/3 octave analyser should be the name

You cannot resolve anything less. And it is centered on 1 khz and not adjustable. Worthless for identifying frequencies and it's harmonics.