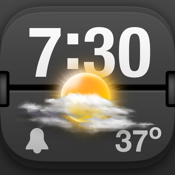 Does everything I want and need it to! Who needs a separate alarm clock and weather app when u have this?! All in one when I wake up!

Great look and minimalist at it's best.

Owner of a business

I love the app great display

Well it seemed great until...

The wallpaper doesn’t show up on my lock screen, nor does it show the four day forecast. There is only one updating weather wallpaper and it is quite boring. And of course their support link is 404. All I wanted was a weather wallpaper with a few photos to choose from like some android phones have for free. I guess Apple won’t let you have them and devs will lie about them even if you do pay for it. Save your memory and your buck.

Awesome. Does what I need.

Needs to be Updates!!

This app was really cool until iOS 10, now all of the features that made it so cool don't work. This is nothing more now than an everyday alarm. The developers need to FIX IT!!

I've used this for years. I've tried many different apps and always come back to this. Please update for iOS 11.

Would be perfect if when on the homescreen the clock and weather would update.

Having same problem as others, would like to also see the correct time on the app

Works like it is supposed to not too cluttered display

I purchased the app over a year ago, and it worked great, but now it won’t show the weather. It just says “Update failed”. The latest version is over a year old, so I’m not expecting a fix anytime soon. Too bad, it was a great tabletop alarm clock.

I've had this app for about a week and I enjoy it. It's very simple and easy to use and has an excellent display. All the basic information I need is easy at hand and I can dammit or make it brighter just by sliding my finger up or down across the page or rather the screen. You can't go wrong here!

After the demise of Red Clock, I was looking for a replacement weather clock and found Weatherclock Pro. It has everything I need but has one major flaw in how it operates. The weather update frequently fails and requires a restart of the app to update. In addition, the update frequency is much too slow for the temperature display to be meaningful. If that can be addressed it would be a five star app.

I use it everyday!

I continue to use this everyday as I have for the last few years. My go to clock app especially at night. Simple, elegant, solid basic features, reliable.

Nice app. Makes an excellent night stand clock that is easily dimmable. One catch: the home indicator on the iPhone X is very bright because the app background is black. Developer needs to set the wallpaper size to fit the newer size screen. Update: force closes nearly every night

Just what I was looking for

I thought it was a good idea but can not change the location for the weather. Has not been updated in over a year waste of money would like a refund on purchase.

I loved this weather clock app and have been using it for years. Unfortunately, a feature I liked no longer seems to work. I like using the clock in horizontal view, but it stays in vertical view. I’ve tried everything I can think of to switch it without success. Any suggestions?

Was such a great app

Now it can’t get weather updates. Maybe it’s the result of Apple’s interminable upgrades. I don’t know, but it is very disappointing.

I use this app every night. I like all the features it offers. However I get a warning every morning that says the maker of this app needs to updates as this app is slowing your phone down. I got that message on an iPhone 5S and I am still getting it on my iPhone 7. Will there be an update soon?

the very good apps thanks master

The tools used to be the best and I used almost all of them but now they are not updating correctly and are corrupt. Do not download or support.

I like this app but it needs to be updated! When I select it as wallpaper it DOES NOT WORK. That was the main reason I wanted it - for the wallpaper. Developers should update or notify users not to expect future modifications!

I loved it would have given 5 stars. But it won’t pick up wether or my location. 😢

Does not display 5 day forecast anymore

It stops working all the time for the 5 weather forecast drop down display. :(

I love the old days flip clock along with the weather!!! Awesome 😁

Could not track my location and no options with pro

I could not get this app to recognize my location (other apps do so no problem) so no live weather info. Only flip clock is available even though the App Store icon shows a different clock. A buck wasted here.

Appears to no longer be supported

Was the best; suddenly stopped working

Was my favorite alarm clock (I’ve tried dozens) for years. About a month ago, shortly before the last iOS update, it became inconsistent; alarms would randomly fail to work sometimes, two or three times a week. Nothing I did made it reliable. I’ve been using it, as I say , for a long time, and I didn’t change anything in it. I still haven’t found an alternative that matches this one in features, but an unreliable alarm clock is worse than no alarm clock. Please fix it, I want to give it five stars.

Not as good anymore

I’ll second that. Everything worked great, even paying to delete ads. Now I cannot get rid of the ads, the alarm is inconsistent and the weather shown for where I’m at is not the weather where I’m at. I am willing to pay more for a great app but these fubars are not good.

Best of its type.

Love the app. IHandy Inc. needs to make updates to stay compatible with the latest iPhones

Best weather clock app out there

I just downloaded weather clock pro and when I went into settings I changed some of them, then clicked done but it will not stay where set. Please fix your app.