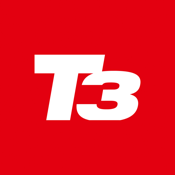 Upgraded to iOS5, and the T3 app vanished and I appear to have lost ALL my previous issues. Upon re-downloading, bookshelf shows no issues. Great magazine, but not great enough to pay for each issue TWICE! NONE of my other magazine apps behaved this way. After the upgrade, the T3 app did not even appear on iCloud. I guess my magazines (and money) are gone forever.

Started with the paper issue....from UK and ME...now only a digital reader....and love it more... Keep up the good work guys...

Great magazine experience. Had a hiccup with the subscription not showing my past magazines but support was helpful and resolved it. Love the way these guys bring the magazine to what it can be like on devices like this instead of boring traditionalism.

The Best Digital Magazine yet

A fun app, obviously a lot of work has gone into getting so much detail here -- it's very interactive, rich and glossy and almost game like trying to find all the little hidden treats. Embedded video, hidden graphics and lots of panels to pan around in. It took a while to download ... I had to keep poking around the LIbrary while it was loading to stop my ipad going into AutoLock, but well worth it once it was finished installing. There is a nifty 360 degree camera view that you can pan around in too. Nice to see T3 have applied as much attention to the digital edition as they do to the print one. It's a bit mind boggling that they've got many of the pages in two layouts for portrait and landscape.

It is nice to be able to get a magizine downloaded, but why not include the entire.content of the actual magizine. i have subscribed to several magizines and each one that dumbs down the ipad version, I do not renew and will never renew again. Come on people. We pay a premium to own a tablet device and a premium to subscribe to a digital version of the magazines. So why do you think any consumer will put up with half content nonsense. Playboy is the only one that has a good deal $8 a month all magazines of their entire library from 1950 to today. Also, t3 has a great many articles and would be nice to just hit on a ad or a photo and go to the venders website. Thats just basic people. Could you all get organized?

Bogus! What a rip!

Imagine being charged an Admission Fee to a Retail store, just to shop. That's what this is. You download the Free App in order to be able to Buy the magazine, so that you can then, hopefully, actually find something you may want to buy and spend $ again.

I don't think it's fair that you can restore the purchased magazines ONLY if you are a subscriber. I have bought a couple of editions as non-subscriber in order to see whether I want to be a subscriber or not. But after an update, all the magazine that I have purchased went missing. Each edition cost me $4.99 unlike the $1.99 a subscriber pays for. So, a subscriber pays less AND gets to restore the purchased editions. Whereas, I, payed a lot more and cannot restore the previously bought edition. That is truly unfair. Evo Magazine on the other hand, actually "remembers" all the magazines I buy, which makes it possible for me to restore them. And only for that, I have become an EVO magazine subscriber owing to their fair and honest business conduct. Unfortunately, Road & Track, T3, Automobile, Robb Report, and Car and Driver Magazine are all the same. Actually Robb Report is even worse because one edition of Robb Report cost me $7.99. I rarely take time to write a review but this time I felt ripped off and had to share this with others.

If you like technology and gadgets this is the perfect magazine.

Nothing interactive about it, just close up pictures of the iPhone 5! Even HELP is not available, BUT it lets me buy a full subscription to the magazine, if I want to! Very disappointing! No way to contact anybody to report it, like other iPad magazines do within their app. Surprising, being that Future Publishing has other great magazines.

You menus don't work, articles from other pages randomly show up in other articles. For a tech mag your not very technical. If these bugs are showing up in your production app I would not buy this mag. Sorry for bad review but if I can't read an article or quit out of the mag then it should not be in the store.

After reading my first T3 on my iPad I can say that I will never go back to old print. It's has so much more depth and content! After all, who can say that they got a 360 degree view of a product in a printed magazine, along with video, interaction and excellent opinions and reviews. The loading time of the magazine is quite long and the auto resume doesn't always work!!! The prices are also high and I Would also like to see bookmarks! But I say it's worth every cent!! Excellent!!

What's up with the huge pages that don't fit on the screen. I have an ipad3 and this is such a pain.

With 6.99 it dosent even matter if navigation is noble. The price is ridiculous so the app.

I purchased a yearly subscription and every month, I put up with downloading the latest issue(making sure, of course, not to let my iPad go to sleep or else the download doesn't complete!) after going through the hassle of all that :) what do I get? Crash after crash after crash after crash! How ironic, you keep on categorizing electronics every month while your crappy app doesn't function properly. Where would T3 rank this app?

Great magazine for $2! Should give a $40 annual subscription deal as in Zinio

I can't purchase a subscription!

The new update is very unstable - it stops downloads and is full of errors!!!!! Do something. We pay money for this so it is unacceptable.

The iPad version of T3 is AMAZING!! Good work guys!

Please refund us our subscription fee

I bought a yearly subscription but this must be a case of bait and switch because after I paid, I cannot read the magazine at all since the app crashes and will not download any issue. This has been the case for several months. I redownloaded the app several times, but it has been of no use. Please refund all of us our subscription fees.

It was working fine but this month it will no longer connect to the store to retrieve information. Since I'm a subscriber I hope they fix this soon.

They want at least $5 for each magazine? Seriously?!

Good luck selling this. Who would pay $60-70 a year for a monthly magazine?!

I've been waiting for this moment, but..... very poor pricing, please reconsider the price

$6.99 for a digital magazine, what are these people smoking? I flip through it for five minutes at borders, but over $80 a year, C'mon please do a little market research. Wired is $3.99 and that's still too much.

Sometimes challenging UI but ever amusing and colorful to match the top notch (and oft snarky) content.

Love this magazine. Blows all others away!!

If you consider buying T3 magazines, DON'T!!! I am struggling for months now to get back the magazines I bought through a subscription. Despite the purchase evidences I provided and a long chain of emails, there was no success!!! The only thing I got was a never ending discussion and several re-installs of the application. Not only I lost my money, the magazines I bought and now also my time. If Apple would be serious they would remove this app from distribution. If you consider getting some of the magazines of Future Publishing, DON'T!!! They have the worst customer support you may imagine. Keep your fingers, and time, far from these time and money wasters... I hope you take this review seriously and don't get trapped in the same problem I did. There is enough amusement out there and T3 and Future Publishing only have grief to offer you. I never imagined I would write such a review... But i feel that it is not even close to the frustration my experience with this magazine, app and the people behind it gave me until now.

So the magazine looks nice, but $40 subscription for a year is to much. I'm looking for more like $15

Just bought the May issue and I can't download it. It says the file is corrupt and try to download it again. I've tried 10 times now, don't buy until they fix this!!!! I want my money back.

Having the same problem as the other reviewer. Was charged for another year's subscription and have been unable to open the app. Months of wasted money. Would appreciate a refund! Thanks

not worth that much

nice setup but weak content too expensive compared to other mags

Return to the old version instead of the stupid one. We can not buy and do not even subscribe. Always ask us to use the appropriate application before making the purchase.

With apps (well, anything really) great customer service is often hard to come by. However, T3 has been impeccable. I admit that I had a problem at first with the app not recognizing my subscription number, but I sent an email and was responded to within minutes! Needless to say, I was up and running with an AMAZING magazine and graphics within 30 minutes. Thank you to Paddy for the great service!

Subscribed through iTunes. 1st 3 attempts to download the current issue failed. Had to uninstall and reinstall the app. Finally worked. Today a new edition was in the library. Failed again three times trying to download. Uninstall and reinstall again. Now continues to error out on the new edition and wanting me to pay again for the first issue I received even after restoring. Seems a tech magazine could do much better than this

I love this magazine

however, i really liked it on iPad! works great!!!

It's a pretty good reader for T3

The built in browser is a bit wonky, but overall pretty intuitive interactive features. As for the content itself, T3 gets 5 stars from me.

No way I'm paying $5 for each issue. You would think with far less overhead by not having the overhead of printing hard copies and mailing them that the digital editions would be cheaper

Why would you lock all the content in the sample edition? Not a very good test drive...DELETE!

One request....include pound to US dollars...I know...and include more US/Canadian items...example...Autel Robotics Xstar Premium Drone...@ $699 during Christmas...4K camera and all the features of the DJI Phantom 4...not on your list...Ouch! This is a must read...love it!

In my opinion nothing can replace the feeing of holding a book or magazine in your hands and turning the pages. However I must admit the iPad edition of T3 that I wait impatiently each month almost fulfills that craving. It is an excellent app. Congratulations. M.H. Emiroglu

buggy and does not work for me

tried to download the free issue several times and was unable to see it. it us slow and buggy. good potencial, but bad implementatio.