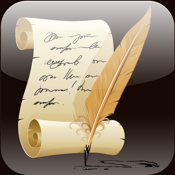 Customer Reviews of the Poets Pad For Ipad App

Good but can be great

As a writer I was intrigued by the possibility of how well this app Help me in the writing process. I found the advertised tools to be useful, but I'd like to see an option to write freely without stanzas for different formats. That would make this app even better. Also there is a bug relating to the key board. I found that in certain situations the key board gets stuck in place and doesn't respond to the key which retracts it. This happened twice while I was using the app. I will be happy to give this potentially Great app 5 stars once those issues are addressed.

My First Poem - ViaSyl's Example This is my first poem using poet's pad And, if it works, I'll be so very glad. It seems to do just what I want Though, true, I doubt it'll make me a savant My purpose here is to explore, And just, maybe, learn a little more Thanks app makers, you've been so grand I think, truly, the world owes you a big hand!

I've been waiting for this for a long time! Wish I'd thought of it myself! LOL Great work! Thank you for all your effort and I'm looking forward to your updates, especially since I'm a poet who writes outside the box. Again...Great work! Cheryl

This is decent app but not worth $10. The dictionary and thesaurus functions aren't working for me. I tried sending a message through their website a week ago and haven't heard back. So much for getting back to me in less than 24 hours as the website claims...

If you've experienced any type of writers block or barriers while writing, this app can get you through it. The layout and ease of use alone is worth the price. The recording feature puts it over the top!

I really was enjoying this app, it was really fun, very cool. But I payed 10 dollars for this and I get half way through writing and it boots me off.... It needs to be fixed or I need money back because it's getting on my nerves. Overall good app. IF that gets fixed...

Great concept, beautifully executed! Works-in-progress are always with you, organized, ready for expression and tinkering should opportunity or inspiration strike. No concerns about poor starts and nascent or evolving work lying around, or lost, or accessible by others who might happen upon stray notebooks, napkins, or the haphazard jotting. And the tools to foster or catalyze one's writing look promising!

Lovin' my iPad's Review of Poets Pad For Ipad

I really like this app. I'm working on my 2nd poem already after only having this a week. It's great how you can whole stanza around. The convenience of having the dictionary and thesaurus in the same app, without having to go to Webster's, is brilliant. Looking forward to great updates.

I love this app! I've been using this for years. I just wish they have a better way to back up all of my work. :/

With the iPad I can carry all my works with me and write whenever inspiration strikes. PP is a good companion. It is very intuitive and contains all the essential resources needed for creative writing in one package. Nice job!

Would love to see some background or an introduction to how poetry is formed. I know there's a lot to learn about the structure of poetry, but a little education would help a lot. Great app. Would love to see some new activity. Something new would be refreshing. Thanks for a usefull poetry app. There aren't many, if any, like it.

Sadly it crashed on me too...

I downloaded this app months ago, but just had the chance to try it now. The features are great, and I was 80% thru my creation when without warning it crashed. I lost every thing, it doesn't even back up as I progress along!! What's with that? I can't afford to lose my work after so much effort and time so I am forced to delete it try something else much more reliable. I would advise against using this app unless you can or want to back it up manually (ridiculous). Developers: fix the crash and make it right, then tell us you did. Maybe then I might test it again.

I bought this app on a whim, because I liked the idea of a dedicated application for poetry composition. It works fairly well for this, and has some nice features, as well as a well-done interface. No doubt the developer put a lot of time and effort into it. That said, I am disappointed that the rhyming dictionary, etc. is not actually stored on the device, but on the internet. This means you have to be connected, via 3G or WiFi, if you want to use the program's main features. I realize that this concern might be moot for a lot of people, but I probably wouldn't have purchased the application had I known this was the case. (Really, though, for $6.99, one can't complain much....) Also, I can't help but notice that "poet's pad" seems virtually identical to another of the developer's offerings, "songwriter's pad," even to the point that dialogue boxes in the application say things like "new song" rather than "new poem." Still, it promises to be a useful and valuable application, if you can live with the connectivity requirements.

Really nice little program! But when I updated to an iPad II from my iPad I, I lost all my poetry files. I am told this is preventable by backing up in iTunes, but be forewarned!

I was using Pages and a separate rhyming dictionary and thesaurus for writing. Now I have everything I need in one easy to use app - it's great.

Wrote 24 lines of "Unexpected Intentions", only the second poem started using this app, expecting the words would remain, be saved for review and further editing. True to the theme of the lost poem, chaos thwarts preparations, a shift and a crash. It is lost. Just a few words of a wisp of a thought, as ephemeral as text written into this app.

The FIRST app that I could truly call a "rip-off".

Most Apps do what they claim to do, sometimes extremely well, sometimes not so well. Pages, Numbers, Kindle, GoSkyWatch are great apps and cost $10 or less. There are some great apps that are free. Many very good ones cost a buck. This one cost $10 - the same as Pages - and is nearly worthless. I mean this is a POETRY WRITING app that has a truly worthless rhyming dictionary. You can Google "rhyming dictionary" and instantly get at least two fast efficient on-line rhyming dictionaries. This app frequently comes up with NO rhyme at all or maybe two or three words. Use one of the other online dictionaries by double tapping while in this app and you get perhaps 100 words for the same query. On top of this, instructions are absent, and the entire app is awkward to use. I resent the fact that I have to write this terrible review to warn others away. I really think Apple was asleep at the switch on this. It should never have got past their QC.

Impossible to manage NO INSTRUCTIONS

by Theophilus No good. No instructions. Complex. Houdini might manage it without tutorial no one else!