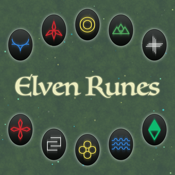 I am crushed. I downloaded this and there are no runes in the spreads. I did email about this. It still does not work.

This app provides great tools for introspection in an appealing package. Thanks!! I agree that it would be 5 stars if there were a journal option where readings could be saved by date. Even better if there were also space for personal notes :-).

Kris who is PISSED!!!!'s Review of Elven Runes

I thoroughly enjoy this app with a reading of "insight" everyday. I do other readings as well and usually they are right on target. I'd give it 5 stars if there was a way to save the readings to resort back to them. Hope this was helpful!!!

wow there is a lot yo this app

I love that there are so many different spreads. the meanings are clearly written and give food for thought with issues of concern. Thank you, great app.

I'm not exactly sure where the developer got this content from, but this is an exceptionally well designed oracle. I would encourage any intuitive looking for something new to explore, to give this a try. It works really well if you create your own physical set of these runes, and use the app itself as a reference. I bought a set of dominoes from the dollar store and drew the symbols on them with a sharpie. They work really well, and like any oracle, the better you get to know it, the more effective they are. Kudos on this awesome app! My only complaint is that the graphical interface kind of looks like crap, but don't let that discourage you, because the content itself is excellent. **** This is an update on my original review which I left in its entirety ***** Version 2 has a brand new interface which looks phenomenal. I've been working with these runes for a few years now, and I can tell you from personal experience that Theo didn't make these up though I am disappointed I haven't been able to track down the tradition they come from. Version 2 has way more functionality. I especially like the journal feature. My only complaint is that in the original, the runes were organized by element, and in this version they're sort of randomly scattered. Anyone who is serious about this set will take my original advice. But I've found they seem to work better on wood, so keep your eyes open for an old scrabble set. Kudos to the developer because version 2 is a major improvement. If you like this app, check out his Viking runes app which has also been recently updated.

Thank you Ted Phillips for explaining how to use this App. I did as u suggested and now it works great and Its very accurate. Awesome!

Its incredibly on! The only thing tho, it would be nice to be able to save certain spreads if we so choose.

This app is great. Easy to use, and as accurate as E-runes get. I would like to see a journal added as well as the spread mats being labeled when you put the runes down to avoid having to tab back and forth. I have had this app for probably a year and a half, never any problems or pesky push notes. :)

This is a great app. Seems some people haven't figured out that you must drag the runes into the casting spaces.

Update after the update. I like the new look and feel. It will take me a while to get use to it. It still seems accurate. love this rune set. Wonderful spreads. Easy to use. And very accurate. I like them a lot more then the Vikings runes. I can't recommend them enough.