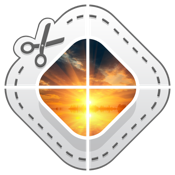 more of the same

i downloaded to see if it would work for me. it certainly can draw tiles on a picture, but, i have no idea if purchased the app if it would actually work? it is actually not good for my purpose, which is i want to print a image which is huge on many pieces of paper. The demo version of the app loads the image, then draw triangles on it. You can change the drawing to rectangles, but it is hard to say what the 'full version' of the app would do at that point? would it print each of the rectangles (triangles)? would it save each of the tiles? or does it simply save a huge image with the lines super imposed on it. I don't know if the app is garbage, but, expected a watermark or something when I tried to print. You really can't tell if it will/won't work for you. Dang.

Misrepresenting what it does

This is a free app, but to use it you have to buy it. I will pay for another before using something misrepresented itself and is a scam.

Can't save images once they are split. However, if you us the keyboard shortcut to save your work, it prompts you to purchase the app. Interesting.

Ditto on this being worthless adware

Title says it all.

This is app whole new level of stupid. Sure it says free but litearlly the only thing you can do when you download it is “Upgrade to full version”. It’s a waste of time and energy.

Can’t even test it out, won’t let you actually do anything with it unless you buy the full version. It draws lines on the screen to show where it will cut but doesn’t even let you cut ONCE! Waste of time.

Devs should at least let the demo print 10 or 20 posters before it forces an upgrade. I wasted my time downloading this stupid demo only to find out that to print, I have to upgrade. God knows what the full app actually does or if it would work with my OS or printer. Stellar decision-making, devs!