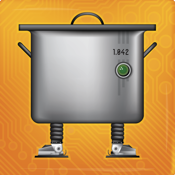 Customer Reviews of the Brewbot App

This has a great selection of tools used on brew day to make adjustments, conversions and necessary calculations.

Nice variety of homebrew calcs and reference material. Quick and useable. A few quirks which I expect will be resolved in a future minor release. Suggest a brew timer and 'favorites'

Uncluttered and intuitive, I use this app many times each brewing session and through bottling. Loaded with calculators and resources - with more added frequently - this app has become an important tool on brew day.

Hi guys. I am using all beer apps on a market,and I think yours are potentially the best,all you need guys to be really Best- is add a button in ingredients menu to add a new ingredients like malt,hops or else. Or another way is upgrade all ingredients ASAP. Menu doesn't exist a lot of important malt and hops types.

All the calculators I need on the fly during a brew session. Saves me time running into the house to do a calculation on my computer.

Great app. Way worth it.

I really like the interface. Awesome calculators. I did notice there isn't any great western malts which is mostly what I use. It would be pretty cool if we could add more ingredients to the list or update them. But for 2 bucks, I shouldn't complain.

My Go-to on Brew Day

This is the only piece of brewing software I use. Everything you'd ever want, right at your fingertips. Very accurate IBU calculations. I use the refractometer correction all the time.

Every thing you need in a Brewing App

I use it all the time

Really nice, clean, simple, useful app for home brewing. This is not a full-scale recipe calculation application. Rather it's for on-the-go brewing calculations. Compared with others I have used, it lacks a few bells and whistles but makes up for it by being much cheaper, much cleaner in design and so easier to use on the fly, and having a few killer features I have not found on others I use, such as BrewMath. Killer features that are worth twice the price of this app in my opinion: 1) Lists of widely available yeast and hop varieties. Say you are at the brewing store. They are out of the lager yeast you had planned to use for your recipe. Which of the others is going to get you close to what you planned? Look it up quickly. I've been using this app only a little while and I've used this already a ton. 2) Gravity adjustment calculator. Your brew day is underway. One beer is too low in gravity by a few points and you need to bump up the gravity with DME. Another is too high and you need to add some water. This calculator lets you adjust both perfectly without firing up your laptop and messing with a full-scale app.

Don't know what to do with this. No recipes. No instructions. Not much of anything here. Some calculators.

Simple, clean easy to use. Has a great range of brewing calculators for on-the-fly use when you're brewing

No recipes. Nothing on brewing. Only references and calculators that you can find online. Wish I could get my money back.

This is a great app to use when planning your brew day and to use to check progress. I noticed a small problem with the app and told the developer, he was quick to check it, he thanked me and the fix was done within a day.