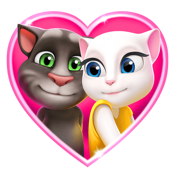 It's cute, but I would not recommend downloading this app. It's kind of boring, because all you do, is just make them dance to each other to this really really really disturbing and awful music, and make them kiss each other, which is not really a good, because a lot of kids play this without their parents knowing, and then they kiss each other, which is kind of disturbing...I did do the love letters, and rewrote them, and they were really cute though. I don't recommend this app though. It's an okay app is what I have to say. If you like, or love this app, than that's fine. I give this app a 3 star rating.

When I was six (now I’m eleven) it was fun until I clicked to( I didn’t click a single ad!) it led me to a website call E.SCAM....COM I didn’t wanna click on ( this button) have fun 😉❤️” i was like what the AND GUESS WHAT HAPPENED IT CLICKED FOR ME AND IT SHOWED ME A VIDEO OF SEXUAL BEHAVIOR!!!!!! Can u fix it please i don’t wanna see the same thing all over again!!!!! Update the game please please please I’ll pay u 10000,00000 money just kidding but I’m serious remove the ads!!!!

Some of this stuff on this game is weird but great game!

I can't do any that no fun

They need to play real songs... ( like one that you hear on the radio)

So nice to see affection and love! My 4 year old loves this!

Really? U call this a game? Two options. This game could be way better if there were more options. A game isnt just u type something cute on a card and send it to someone. I am not even sure wut the second button is either. This is stupid. Wut is the point in this. I already deleted this app after thirty seconds of looking at it. This needs more. Why is this even a game in the first place when the creators cant even make something creative out of it. Who ever is reading this, plz dont get this because its boring and s***** and takes up storage. Thx for ur time!!! 😒😒😒

Well, I it’s OK. But..... tbh.... I really don’t like the songs.... I had to mute my phone for this app tbh.... but the good thing is that u can put a song up in iTunes, but if other people didn’t have enough money for the songs or doesn’t have any songs, they will have to stay or stick with the song they play over and over. I guess. They have other signs, but they are more.... cringe. So yeah. That’s my report. 😶😓 😐

Its not the best

This game is a little weird. Once I was playing it, and someone said what are you playing, and I was so embarrassed. The reason I gave it 2 stars, was because the music was a little good and sounded catchy. But the game its self is just boring. Don’t waste your space with this app. Its just not worth it.

Ok. When I was looking through the love letters, I saw something where Angela was wearing a dress and was sticking out one of her legs, and Tom was looking at her with his tounge hanging out. And below it was labeled, “You are so hot!” Please take that off.

Thanks again and I am not able too

Is want it to have more action

I love it and the games about love

I love this app so much, but I suggest adding more features!

I’ve been a fan of you guys since you first originated in 2012! I love all of your games so much! I remember playing this game when I was about six or seven years old and I’m so glad that you guys started updating it again all these years later! It’s such a cute game! I especially love the love letters feature! I can write my own messages or just send them how they are! Although, as much as I love the letters feature, I have to agree with a few other reviews about them being inappropriate. I think that a lot of these reviews are just people exaggerating it because they aren’t that bad, but there is ONE, just one, that crosses a line. It’s basically where Angela is wearing a partially revealing dress that she pulls up while Tom is staring and the default caption reads, “You’re so hot!” Again, that’s the only one of these cards that I have a problem with and I love them so much, so please add more! Another thing that a lot of the other reviews say that I have to agree with is that the game needs more features. It’s probably the cutest game on the AppStore, but it’s not necessarily the funnest. For example, you tap them to make them dance, kiss, etc., but that’s where it ends besides the love cards. Perhaps, you could add a chat like you do the other games, those are very fun! Also, if any parents are reading this wondering if it’s a SAFE game for their child, IT IS! Don’t listen to rumors about there being “a hacker in the eyes!” I just felt like that needed to be said for any worried parents/guardians or even kids! One last thing, everyone is complaining about how bad the music is! I mean, a few songs are definitely not the best, but there is one song that I particularly like and the others I don’t mind! Thank you for taking the time to read this review! Overall, this is a very good and cute app that I thoroughly enjoy! I love this app and the company behind it! Keep up the good work! P.S. The animations were amazing too! Ignore the people saying that the developers put no effort into this app, the animations obviously took up a lot of time and effort! As a person that animates a lot as just a hobby, I can’t say that this app obviously took some degree of effort and the animations were just incredible!

Cat’s that are in love under Paris!

Stop being s***** and get a better haircut

Love this video for my Granddaughter she listens to this and feels so loved because she is so loved. She is the most precious tiny little blessing from God I could have ever asked for.

This game is so boring that it needs an upgrade

This should be age 13+ cause they kiss and that’s not good for children and I delete the app and I say that there is one part of the letters that say so hot like kids play this app. Plus who knows if there is a hacker in this app. I give this app 1 star

Great app so addictive.only for kids 12 & older. Vary inappropriate for for kids.

I want a QWERTZ keyboard

I don’t róceme Ed this

I love this game so much even though this game make me so happy and i love is a lot.❤️😜

I think my fav Tom & Angela are both in luv @

This a good game you can read and listen to Muskie

Cats are cute but

i love her 👨‍👦‍👦's Review of Toms Love Letters

This app is cute and awesome thanks for making it awesome

Someone said that the pic of Tom sleeping it said don’t close your eyes they will find u they showed it on a ytv but it says make your own love letter!!! Like wow he’s rude trying to make your app bad

This game is super cute, I love it. Even though there's not much to do, sometimes I just make a card, save it, then text it to someone. I texted so many cute cards to people✉️📲. The music is also great too! Very cute. I would totally recommend this game, mostly because of the love letters though.👍👏👌

THIS APP IS SO BORING!!nothing relley to do I rate it 1

I love this game

Why is Tom naked

Uh, firstly, it has “your so hot” as a card, NOT FOR KIDS. Very boring, and to me it’s weird would not recommend