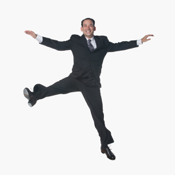 Customer Reviews of the Learn To Tap Dance App

Want to tap's Review of Learn To Tap Dance

This is a terrible ap. Sorry I wasted money on it. None of the videos work. Do not buy this.

The Series is not in order

First, cut the repeated intro out of each clip! Second, reorganize them in LEARNING order - each lesson is numbered however, the first one refers to a step presented in a prior clip, and all are out of learning order. Other than that, the lessons are clear and easy to follow. I've just finished my first six months of tap and performed in a recital on Tuesday. I joined the class FIVE months late, videoed the instructor, took a couple private lessons, and worked out daily in the studio for 2 to 4 hours until I could execute the steps already taught. Then I added the combinations that made up the routines. In the last two months, class members were asking to join me. We got the best reviews - better than the Intermediate and the Advanced classes. Not only were we in sync, but we looked like we were having the time of our lives - I worked with everyone on smiling and playfulness and it worked. I wanted instructions that broke down the steps more clearly and it looks like these are them. Make the two corrections suggested and it will be perfect!

This is a good instructional video for a beginning tap student. The lessons are clear and easy to follow. The only thing that is annoying is that the instructor introduces herself before each short segment. One intro was enough for me.

???? seriously? Don't download this, don't buy it. It's a deliberate rip off full of junk that has nothing to do with tap dance. The ones that appear they might be legit don't work (no sound, bad quality, etc.) Refunds for all.

This is full of junk videos; I suspect the app developer doesn't even own many of these videos and just stole them. Many of them have nothing to do with tap dancing, such as knot tying.