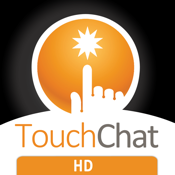 Good alternative to Proloquo2Go. For now...

I've had TouchChat since it's initial release. It has DEFINITELY gotten more solid as time has gone by and it is finally stable enough where I would feel comfortable recommending it. Still, I can't help feel like something is missing and, at the end of the day, I recommend P2Go nine out of ten times. The Pros: - Extremely customizable - can change individual background cells, assign actions to buttons, modify font (size, color, placement), put buttons wherever you want - Modest price point (cheaper than Proloquo2Go and Speak4Yourself) - Made by a reputable company who has a long history of making AAC devices. - Has fixed a LOT of bugs in recent versions and now, finally, appears stable. - Comes with several pre-done vocab sets (although, truth be told, I always start from scratch anyway, so having vocab sets included doesn't mean a whole lot to me…) The Cons: - Quality of the SymbolStix icons is bafflingly bad! Especially compared to Proloquo2Go, the SymbolStix simply don't look great in any version of TouchChat - Having to purchase separate versions for iPad and iPod (unless you want to scale up the iPod version) is unfortunate, especially when many families have both iPods and iPads. - SO many options to customize may turn people off. - Addition of WordPower vocab doubles the price of the app. it's worth noting that one of TouchChat's greatest advantages over Proloquo2Go (it's ability to be customized) will be neutralized once Proloquo2Go 2.0 comes out. At that time, one of the most convincing reasons to select TouchChat will now be eliminated.

This program is so easy and flexible to fully customize. It is an awesome program to develop a new vocab. The word organizations on the market are not good and I am really greatful for a program where I can build and customize my own so well. Developing new customizable vocabs would be a real boon to the AAC market--especially for those who have outgrown devices that are really just a series of choice boards but who don't have full literacy or grammar yet. The upgrades have improved the program, but it still crashes unexpectedly while in use on occasion.

Great until you edit

I really touted this as a great thing on my web site based on demos I had seen. However, once I got it into my hands, i got very frustrated. Very poor voices. "Nelly" is not a good child's voice. Buttons can't be moved, copied or pasted. When you are in the 16-button page (as an example), some of the buttons that should show are hidden. You hit "edit page" and you see all the buttons and they rearrange themselves so you can't really tell where things will go (and what buttons will disappear) when you back out of edit view. The "scene based" does not work like a traditional scene base where you can put a button anywhere and move it around as needed. You can only use a grid. Very disappointed. I bought Proloquo2Go and thought this would be better. Paid for this one and now it is wasted. Going back to Proloquo2Go.

Well done app. It's exactly like the full version on the Alt Chat device. Look forward to using it with my clients.

Great application but needs some fixes

I like this application. It has built-in vocabulary but allows easy customization. I just created the custom vocabulary today and my son is already using it! The only problem is that when I edit a button in one screen my changes affect absolutely unrelated button in another screen, which is obviously a bug.

Terrible app. Get Speak for Yourself or Proloquo2go

TouchChat is an awful app. Proloquo2go and Speak for Yourself are both much better. None of the TouchChat vocabularies that come with this app are any good. They're based on outmoded low expectations of nonverbal people and they don't support language development. In addition, editing is really cumbersome in TouchChat. Speak for Yourself and Proloquo2go both come with good vocabularies out of the box. They are also much easier to edit and back up. Don't waste your time and money on TouchChat.

Disappointed with this purchase as it only works on the iPad. For the price there are better apps out there that only cost a little more that are compatable across mutiple devices and have way better reviews. Also the lack of the picture in addition to the word going up into the sentence s**** is a major drawback. When I did deal with Customer Service they were less than helpful.

We use this app on our daughters iPad, it works pretty well. I wanted to add the app to my phone for a more mobile option and the company wants another $300 for the iPhone app... What a joke! I can't recommend this app - use ProLo, at least their app works on both iPad and iPhone and they don't try to charge you twice. I gave the company the opportunity to make it right and their support and answers were a joke, they tried to blame Apple. In the very least, if you purchased the $300 iPad app, they should offer a credit for the same iPhone app.