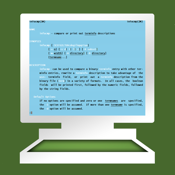 The best ever. Try it. You will love it.

Used to take a laptop out into the field to program equipment. This program coupled with Roving Networks Wi-Fly allows me to program in terminal without needing a laptop.

Save your money, this is a worthless app. Unable to use - times out way to fast. Unable to connect.

With a few tweaks this would be a 5 star app.

I love this app and think it works great, however I have 4 suggestions to make this a 5 star app: 1. Don't limit the # of sessions for the paid version. 98 sessions may be enough for most, but since I paid for the app I would expect no limits... 2. Add an option for sorting sessions. Drag and Drop is rather tedious when you have a lot of sessions... 3. Add session folders for keeping like sessions together rather than just one main session window that all of them are listed in. 4. Add iPhone 5 support! Thanks!

I got this app because I am an advid Trade Wars 2002 Player and I want to be able to log in and check my universe from time to time from my iPad. I don't usually have my notebook with me so when I just have the iPad I can at least log in and check. It would be a nice addition to this program if you would build in an ANSI terminal emulator that does ANSI/ASCII graphics. I tried lite first just to make sure I could connect to the telnet BBS and it did. I then dumped the lite version and just bought the full version. $5.99 is a very reasonable price. I may try this on my iPod touch but probably not as the iPad is much better for keyboard intensive apps. (Yes, I am dating myself... i am a throwback to the '80s BBS era

Works well using the iPhone's VPN client. However, it would be nice if it had a scroll-back buffer.

YOU HAVE TO HAVE A MAC COMPUTER TO USE THIS APP. DON'T GET IT!!

Is there no way to enter "nextlines" in a macro, or am I just dumb?

This software works very well with a vt320 terminal program as well. I van monitor and create server reports and data from my iPhone. This is awesome!

Obviously several of us would like to see SSH implimented, but I don't know that we will see it soon. Their WEB site claims it is a "government protecting us from ourselves" issue limiting the exportation of encryption software. If so, that is troubling. It is also weird, however, that they seem to sell a Windows Mobile SSH version with no problems! Hope it comes. As is, it is a very good Telnet implimentation, for what ever you find that worth. I bought it on the hope that SSH will get eventually added...

This is an amazing app. I actually bought the full version because this dev deserves to be paid for creating such a quality piece of software.

Used it to connect to cisco equip. Worked well.

Works, but hard to use

If you -need- telnet on your iPhone and iPad then this works... the biggest complaint for me is how obtuse it is to use. Also it doesn't support ANSI if you're looking for that.

Use this app to program various IP clocks around my home and office. Various brands, using telnet access is easy when you can have all the IP's listed for immediate access.

This app allows me to be totally mobile at work gone are the days were I have to be at the desk to monitor our associates and now I can be a lot more efficient out on the floor without having to run back to a computer I have our entire operating program directly on my iPad which saves time in a fast pace environment,THANKS Telnet!

Best of the telnet apps...

Sure its not SSH, but when you combine this app with the iPhone's native VPN support - you've got a secure useful command line solution. I paid $2 for that other "Telnet" telnet app last week - and I think that for 3 times the price, this version from Mocha is 10 times better! The interface is smooth, it supports zooming, and best of all, and it allows you to re-map the function keys! (The $2 one doesn’t even support functions navigation or interrupt keys). This application is going to make my life (and my job) a heck of a lot easier. Don’t grade it too harshly because its not SSH… this app delivers on everything it promises. Five Stars! Thanks Mocha! This thing is worth every penny!

Best SSH app on the market

Great functionality, auto-screen sizing, and macros makes this the best SSH app in the market.

Only 8 macros available... This issue is really an obstacle since it's a mobile app, which obviously mean that you don't want to have to manually enter most of the commands! They promised an update few months ago to resolve this issue and I promised to otherwise write a negative review. Here it is. This app is clearly useless with a so limited amount of macros. And, yes, I'm refering to the paid version...

Telnet is NOT SSH, but still a necessary evil in some areas

Works exactly as expected - MochaSoft is delivering quality applications at an excellent price. To get this functionality on any other phone/handheld we used to be held hostage to the one or two developers who could write for those platforms - I paid $99 bucks for an SSH client for the Blackberry - best of breed, did exactly what it should do, but on the PLATFORM it sucked. Yes, there was a free version, but it did not hold a candle to the paid app. And I only paid $6.x for this app that beats anything I used before. YES, we need SSH and need it NOW, but until then I can use MochaVNC to VNC to my Linux desktop on a VPN, and use SSH from there to wherever I need to go. Did not even try out the FREE version, bought the paid version right off, suggest all add it to their application list and wait patiently, it is only a matter of time before either MochaSoft produces SSH or some other vendor - I prefer MochaSoft simply because they have an excellent track record so far. Now if they could produce a tethering app

The lite was/is so useful in my work I feel I owe them so I'm buying the full version.

New update messed up the app badly!!!! When you trying to put in the driver number and password, its blank! I don't see the numbers at all. It all looks white. And there is even more bugs. Thats the most important app I use on my phone daily and now its totally useless!

Verified: It does not do SSH

While this app does telnet beautifully, it does not do SSH. I tried it to port 22 and it will telnet to the SSH server port on the machine in question... but does not establish an SSH connection. I suspect the implementation of the key exchange may be a little more complicated. Hopefully MochaSoft will include this in a future update.

This app is what I was waiting for but I was expecting it to have SSH but appears it DOES NOT. That would be fine it all I did was VPN into a local network to do command line work but I actually have many UNIX servers with outside NICs so I would never expose TELNET to the outside world. I hope you can provide an SSH client in the next upgrade and then I'll be very happy and rant-n-rave all over you guys.

I needed good VT220 emulation for my day job and this app works! Many terminal emulators don't get VT220 quite right. This one has it down. Now, if you guys could release a Mac OS X version to run on my desktop that would be just fantastic.

With 2.9, the app is once again the best Telnet VT emulator for IOS.