The Adventures Of Tintin App Reviews 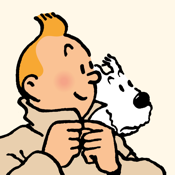 The Adventures Of Tintin App Info

The Adventures Of Tintin App Screenshots

Customer Reviews of the The Adventures Of Tintin App

/r:b:'s Review of The Adventures Of Tintin

I'd have to say this is better than a Tintin book, which eventually gets smudges. No software problems so far, and a joy to read. It's also great to get the original French versions, if you want. Now if only the Asterix people would make a similar app...

App does not work

BourDC224's Review of The Adventures Of Tintin

I bought the whole collection. Was able todownload a few. Then, i changed m'y iPad. Since Thein, none are downloding and i guet a black screen

canard_42's Review of The Adventures Of Tintin

vahoug's Review of The Adventures Of Tintin

I have been reading Tintin books for over 50 years now. I have probably gone through each of them more than 50 times. I still enjoy every bit of it. What a great classic.

stuladhar's Review of The Adventures Of Tintin

Why is this not available in English?

90’s kid's Review of The Adventures Of Tintin

It’s amazing, but in my wallpapers gallery,only Tintin in Tibet dragon shows up, the others are just Tintin et Milou logo in black and white, please do help me out here.

Mack M's Review of The Adventures Of Tintin

These are new translations into English. While I would have preferred the translations I grew up reading, I can excuse replacing some phrases no longer in common use. I can even appreciate what I assume to be the restoration of words that may have been toned down for the sake of sensitivity in earlier editions. There are infrequent errors in grammar, though, that are a distraction when they arise. They bothered me much more when I first noticed them, and I've rewritten this review to be less condemning. With those grammar errors in mind I'll say this is a beautiful if slightly flawed app. The interface is handsome and straightforward. I patiently waited for English editions to be added. When they were I was irked that they were more expensive than the editions in other languages. Hoping for a discount for buying the entire collection, I waited for months. Titles were so slow to appear in English that I gave in and started to buy the volumes that were already available. The new books are certainly beautiful, and I love the idea of having them on my iPad. I guess I just wanted perfection for Tintin. It pains me to give the app less than 5 stars.

WhoDey2376's Review of The Adventures Of Tintin

I bought 5 books then after the purchase realized it's not in English. Very sad 😥

Sup27606's Review of The Adventures Of Tintin

Is there a new book coming out? Its been more than two months from “Cigars of the Pharaoh”. Also the release of English version seems to be quite slow, one book every two months. At this rate it will take four years to publish all of them! Please publish them sooner!! BTW, I really like the quality of the ebooks. I like the small cartoon figures, but I think they are too small. Also they don’t seem to do anything other than sitting on the bookshelf. When I tap on them, I want them to zoom in and perform some animation (like Castafiore singing, Calculus roller-skating, or the moon rocket just doing somersault etc.).

Bianca Aimee's Review of The Adventures Of Tintin

Can't wait for English language. More better with Indonesian translation ( in my dream ).

OnePurchaser's Review of The Adventures Of Tintin

While it's wonderfully convenient to have the Tintin albums available for the iPad, there are some minor problems (e.g. The colors are very bright and saturated compared to the paper printing), and one major problem: the really poor new translation. As the Wikipedia entry notes: "The process of translating Tintin into British English was then commissioned in 1958 by Methuen, Hergé's British publishers. It was a joint operation, headed by Leslie Lonsdale-Cooper and Michael Turner,[58] working closely with Hergé to attain an accurate translation as true as possible to the original work.[59] Due in part to the large amount of language-specific word play (such as punning) in the series, especially the jokes which played on Professor Calculus' partial deafness, it was always the intention not to translate literally, instead striving to sculpt a work whose idioms and jokes would be meritorious in their own right. Despite the free hand Hergé afforded the two, they worked closely with the original text, asking for regular assistance to understand Hergé's intentions." Much of the humor has been lost, and there are many English mistakes and clumsy sentences, sometimes embarassingly clumsy. If the writing is important to you or to someone you're giving Tintin to, stick with the Paper albums.

Bistamy's Review of The Adventures Of Tintin

I have been charged $65.35 for the entire collection as I’m ready to download to read the books they want to charge me again another $1 dollars to download what is that ? Can someone help me with this Or I want a refund back please. Everything will cost at least 90 dollars to being able to read the entire collection. Why you guy doing this from 59 to 90 dollars there is a big gap. Thank you to respond

Jfantomaster's Review of The Adventures Of Tintin

I waited a long time for this! Those books were part of my youth and I always wanted to read them again and now : VOILA ! What a great idea to do that. The quality and presentation are excellent. Thank you so much. Great work remembering Hergé.

jolly bob hoe head's Review of The Adventures Of Tintin

It’s amazing having one great collection of books all in one place. Plus all the books only cost $3.99. I love the books and their characters but the thing that makes them so good is that they have meaning and they are so well thought out. 5 stars all the way.

M.E.Q's Review of The Adventures Of Tintin

Nice app. Which brings a lot of good memories , waited a lot for English version

crowley_one's Review of The Adventures Of Tintin

Tintin is in French, which should be apparent if you look at the description which is in French and the pictures which are in French. Four bucks for each issue is a steal. Great way to keep up your French if you are just leaning the language. Probably not for beginners though. Very happy with this so far. English language may arrive sometime in 2015, if copyright issues get worked out. <-- from Tintin website.

Oglpek's Review of The Adventures Of Tintin

I bought tintin in the Congo, and had no problem. So, I bought tintin in America and it won't download. I've tried different networks and my data plan. As of now old Herge stole my money. Where's Thompson and Thompson to fix this mess? Update it's a week later I've tried more networks, and still no download.

sks-er's Review of The Adventures Of Tintin

Although the description says “Languages: French, Dutch, English (in English), the installed app on my iPhone says “English coming soon”.

Fantastic Application… Worth The Price

jmdecombe's Review of The Adventures Of Tintin

So many good memories, and all in one convenient place… looks gorgeous on my iPad mini with Retina Display. I love the bookshelf with the figurines… please add more from different stories. I have purchased all the Tintin books and I am now about to purchase all the Jo, Zette, and Jocko books… please add Quick and Flupke books next! Note that there is a minor bug in the app… if you install it then purchase your first book, but Apple requires that you update your credit card in the process, you will be back to a state in the app where it thinks that you have yet to download the book, but when you do, it says that you already downloaded it… the workaround in to delete the app and reinstall it, and download all your books again. Besides that, the application is quasi perfect.

Good but could be better.

mister zed's Review of The Adventures Of Tintin

PLEASE ADD ITALIAN!!!!!!! It's great to have Tintin books available on your phone and sold for a reasonable price. The best thing is that buying the book in an additional language is only $1. So I'm now enjoying Tintin as I learn Dutch (and then French). The not-so-bad thing is that I have to buy the book in English first. I am guessing that if my native language were French, I would have to buy that first before I could buy the English version. This isn't ideal, but it's not too bad. I already have all the books in English, in printed editions. The really bad thing is that the electronic version of the book forces the reader to use the pagination from the paper version. It would make FAR more sense to have a frame-by-frame layout, where you could just keep advancing to the next frame. As it is, you must manually zoom in to read the frame, and manually zoom out to advance to the next page, and manually zoom in again...doing this over and over and over gets really tedious. Also, there are a very limited number of languages, while (if I remember correctly) the paper version of Tintin might be nearly the world record holder for being translated into more languages than any other book. I expect this will change as they get more books scanned in, so I'm not too worried, but I would love to use Tintin to help me learn Italian, Serbian, and improve my Spanish and Portuguese.

Munari52's Review of The Adventures Of Tintin

I have the albums in three languages and still got this app so that I can have access to the digital collection any time, anywhere. A must have for Herge fans.

Good quality but they DOUBLE CHARGE you for the downloads.

Husker Zach's Review of The Adventures Of Tintin

They charge $59 for all the Tintin covers and some virtual statues from the different episodes. But then when you download the actual TIntin comic album they want $1 more for every Tintin you download if you actually want to read one. So kind of gouge you twice. Happens a lot with apps like this. But just good to have a guy let others know what they’re getting into before dropping money 💰 into something like this. The actual Tintins to read are not available. Seems like kind of a ripoff for $60.

Amkor454's Review of The Adventures Of Tintin

App works well, glad to have Tintin on the go now.

My childhood is now on my iPad

Dito1999's Review of The Adventures Of Tintin

Love Tintin, love this app. Wish they would hurry up and finish publishing all the books already!

Can’t get enough of this series

aymehr's Review of The Adventures Of Tintin

Stories are funny. I always come back and binge read this series and sometime lose track of time. The stories are very fun. The support team is also amazing. Very very polite and helpful reps. I can’t wait for the future books to be released. I hope we see cross platform support like we see in “movies any where” this way I can read these titles on my laptop.