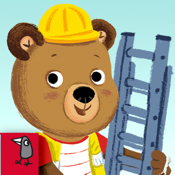 Customer Reviews of the Bizzy Bear Builds A House App

My child loves Bizzy Bear. The story is great, she loves being able to move the characters and the objects. Such a great way for children to learn about building. Overall a great story and app to get for your child.

My 5 yr old son loves this!

Let the kids handle the machinery with this one!

So cute and fun to have the kids help use the machinery while building a house! This is our first Bizzy Bear book but certainly not our last!! :)

I waited and waited for this app to hit free and I snatched it up, when it did! I have to say, I thought it was going to be more of a story, BUT it is still a great app! The interactivity of this app will allow me to use it many different ways with young children in speech therapy. One thing I did not like was how the blue dots would just jump back and forth between people over and over and over and over. I know this was used as a cue as to who you need to touch so that person will talk, but as I said… since this isn't really a story, there is no SET dialogue that is followed and you can stay on the same page for 10 minutes bouncing back and forth between the same two people. It began to feel like a tennis match to me…. I would love to see this as more of a story so that the child has to interact based on what is read. Other than that, I think it's a great start to a great app! Thank you!